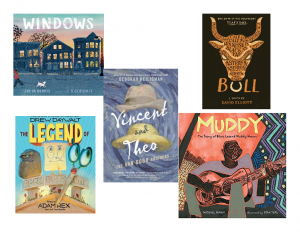 It’s hard to identify a trend in this year’s list—the fiction collection is one of our most genre-diverse in years, with verse novels and humor, mythology and realism, fantasy and tragedy all rolled together.  While we love our nonfiction list, the nonfiction boom we had for a while seems to be tailing off, so we hope to see a resurgence and tougher competition next year.  And picture books—well, picture books are just an untrammeled joy, filled with love, humor, and wisdom in places expected and unexpected. You can find a trifold here.  Bon appetit.

Dowell, Frances O’Roark. Sam the Man & the Rutabaga Plan; illus. by Amy June Bates. Dlouhy/Atheneum. Gr. 2-3
Vegetable-averse Sam gets stuck with the seemingly boring rutabaga for a science class project but he soon bonds with his vegetable; kid logic, kid humor, and an unusual friendship makes this a standout among chapter books. (February)

Elliott, David. Bull. Houghton Mifflin Harcourt. Gr. 9-12
Reveling in the mythology’s violence and lust, Poseidon narrates in free verse with a hip-hop cadence, while other characters—Minos, Theseus, and Asterion himself—add their poetic takes in this sometimes bawdy, sometimes heartrending retread of the myth of Theseus and the Minotaur. (February)

Frost, Helen. When My Sister Started Kissing. Ferguson/Farrar. Gr. 5-8
In this story of summer growth and changing family dynamics, skilled poet Frost employs different verse forms in poems from the perspective of various characters as sisters Claire and Abigail spend the summer with their dad and new stepmother. (February)

Mabry, Samantha. All the Wind in the World. Algonquin. Gr. 8-12
Mabry’s searing, evocative prose brings alive the barren landscape of a drought-ridden U.S. that backgrounds the tragic and ultimately doomed relationship between migrants Sarah and James as they work for the wealthy owners of a possibly cursed ranch. (October)

Renner, Benjamin. The Big Bad Fox; written and illus. by Benjamin Renner, tr. from the French by Joe Johnson. First Second. Gr. 3-6
Both sassy and emotionally savvy, this graphic novel follows the Big Bad Fox (he’s not quite as big and bad as the Wolf) as he falls in parental love with the three chicks that were meant to be his dinner. (April)

Reyl, Hilary. Kids Like Us. Farrar. Gr. 7-10
Teenaged Martin is autistic, an obsessive fan of Proust, and the son of a film director currently shooting in France; those characteristics combine in this surprising story of a young man who gradually develops unexpected friendships across some challenging borders.  (November)

Reynolds, Jason. Long Way Down. Atheneum. Gr. 6-10
In this gripping but accessible book, Will encounters six ghosts, each somehow connected to his brother’s death, that ask him to choose between dealing with his own grief or creating more for others. (October)

Thomas, Angie. The Hate U Give. Balzer + Bray. Gr. 8-12
Inspired by the Black Lives Matter movement, this story of African American Starr and her run-in with a police officer that leaves her friend dead makes the political personal as it portrays the everyday truths behind all too familiar headlines. (March)

Wallace, Kali. The Memory Trees. Tegen/HarperCollins. Gr. 8-12
Fans of family dramas played out over generations will find Sorrow Lovegood’s tale a page turner, as she navigates long held feuds, well cloaked secrets, and the possibility of dark magic in her family’s history. (September)

White, Ellen Emerson. A Season of Daring Greatly. Greenwillow. Gr. 7-10
Jill Cafferty breaks the glass ceiling of professional baseball when her 90mph pitch has the Pittsburgh Pirates calling, but she struggles with her surprising newfound fame along with unsurprising sexism and misogyny in this novel that will reach well beyond sports story fans. (February)

Grimes, Nikki. One Last Word; illus. by James Ransome, R. Gregory Christie, and Elizabeth Zunon et al. Bloomsbury. Gr. 5-8
Between the covers of this compact volume lies artistic, literary, sociocultural, and curricular gold; using the golden shovel poetic form, Grimes honors the strong African-American voices of the Harlem Renaissance while using their works as springboards for her own pieces. (December 2016)

Heiligman, Deborah. Vincent and Theo. Holt. Gr. 7-12
Readers might know about the starry nights and the severed ear, but they’ll likely be unfamiliar with the moving, intense bond between Vincent Van Gogh and his younger brother Theo, and how without Theo, there would have never been any sunflowers or poppy fields. (April)

Mahin, Michael. Muddy: The Story of Blues Legend Muddy Waters; illus. by Evan Turk. Atheneum. 6-8 yrs
This picture-book biography follows Muddy from his Delta childhood under the care of a churchgoing, blues-skeptic grandmother to his first recording success; the dynamic illustrations and lyrical text will have kids ready to string their guitar and belt out their own tunes. (September)

Paquette, Ammi-Joan. Two Truths and a Lie: It’s Alive!; by Ammi-Joan Paquette and Laurie Ann Thompson; illus. with photographs. Walden Pond/HarperCollins. Gr. 3-6
A clever game format introduces readers to three different stories per section, asking readers to figure out which statements are true and which are fiction.  Science-minded readers might have a leg up on the answers, but kids (and adults) are in for some surprises. (May)

Rusch, Elizabeth. The Music of Life: Bartolomeo Cristofori & the Invention of the Piano; illus. by Marjorie Priceman. Atheneum. Gr. 3-5
This ebullient picture-book history documents the creation of that now nearly universal instrument, the piano, in seventeenth-century Italy and the world’s gradual realization of the wonderful music it could make.  (April)

Siy, Alexandra. Voyager’s Greatest Hits: The Epic Trek to Interstellar Space; illus. with photographs. Charlesbridge. Gr. 4-8
The energetic layout of this look at NASA’s ambitious project includes breezy and appealing mini lessons on science and history, a bounty of photographs, and highlights of planetary fly-bys that will leave readers’ minds blown. (June)

Wood, Susan. American Gothic: The Life of Grant Wood; illus. by Ross MacDonald. Abrams. Gr. 3-5
This title introduces young readers to the artist behind the iconic American Gothic painting and looks at how his upbringing in Iowa, his studies in Paris, and his desire to portray rural America shaped his signature style. (September)

Cornwall, Gaia. Jabari Jumps; written and illus. by Gaia Cornwall. Candlewick. 3-6 yrs
Jabari’s ready to jump off the high dive at the pool—maybe. The board looks awfully high from the bottom rung of the ladder, but with a little support from his dad, Jabari climbs his way up and takes the leap in this tender, reassuring tale. (May)

Daywalt, Drew. The Legend of Rock Paper Scissors; illus. by Adam Rex. Balzer + Bray. Gr. 2-4
The origin story of the playground game is told in epic comedic fashion as warriors Rock from the Kingdom of the Backyard, Paper from the Empire of Mom’s Home Office, and Scissors from the Kitchen Realm search for worthy opponents. (March)

Denos, Julia. Windows; illus. by E. B. Goodale. Candlewick. 4-8 yrs
There’s something magical about an evening walk, and our protagonist meanders through his neighborhood as the bustle of the day settles down into a nighttime lull in this warm, inviting book that will no doubt inspire a few sunset strolls. (September)

Ellis, Carson. Du Iz Tak?; written and illus. by Carson Ellis. Candlewick, 2016. 5-8 yrs
A group of insects work together to build a fort, but the fun in this picture book comes in decoding the bugs’ chatter, which is not in any human dialect; be prepared to hear shouts of “Booby voobeck!” and “Unk gladdenboot!” after this linguistic outing. (December 2016)

Graegin, Stephanie. Little Fox in the Forest; illus. by Stephanie Graegin. Schwartz & Wade. 5-8 yrs
In this endearing wordless story, a little girl follows a fox that has taken her beloved stuffed toy and finds herself in a fantastical forest village; viewers will want repeat looks at this one, as the illustrations are packed with delightful Easter egg details. (February)

Graham, Bob. Home in the Rain; written and illus. by Bob Graham. Candlewick. 4-8 yrs
Graham focuses on the small details in this story of a mother and daughter’s long drive home; cozy lyricism and cheerful but nuanced art may inspire kids to look at that oh-so-boring ride to the store in a different light. (September)

Schwartz, Joanne. Town Is by the Sea; illus. by Sydney Smith. Groundwood. 5-8 yrs
A young boy in the 1950s watches his father go off to the coal mines of Cape Breton, Nova Scotia in this quiet, contemplative tale that deftly conveys both the comfortable rhythms of the boy’s life and the genuine perils of mining tradition. (April)

Veillé, Éric. My Pictures after the Storm; written and illus. by Éric Veillé, tr. by Daniel Hahn. Gecko. Gr. 1-4
In this trim but subversive board book, an array of simple objects occupies the left side of each spread, serving as a “before” image; the right side humorously displays the same objects “after” an event—do not, however, expect these transformations to march forward in predictable lockstep. (May)