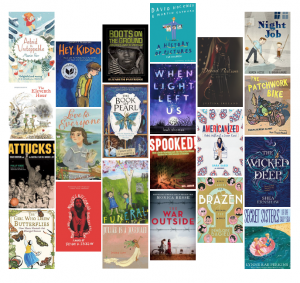 It’s been a year of inspiring originality across the board, interlaced with some vivid new takes on classic stories. It’s a particularly good year for female subjects, with complex portrayals of girls dominating the ﬁction list and several compelling biographies (and one autobiography) scaffolding the nonﬁction; picture books are strong on the celebration of bonds, whether with grandparents, parents, or new friends. Since only books that can stand as independent reads are eligible for Blue Ribbons, be sure also to check out our period Series Spotlight feature, where we highlight literary achievements whose impact requires two or more books for full force. In the meantime, you’ll ﬁnd something for just about every young reader here. You can download the brochure of the full list as well.

de Fombelle, Timothée. The Book of Pearl; tr. from the French by Sarah Ardizzone and Sam Gordon. Candlewick. Gr. 7-10
Familiar fairy-tale motifs blend with history to make this a poignant tale of ﬁrst love, in which readers follow the narrator through storybook lands and World War II to ﬁnd a bittersweet ending. (March)

Ernshaw, Shea. The Wicked Deep. Simon Pulse. Gr. 8-12
A chilly atmosphere, an insular town, and a centuries-old curse are key ingredients in this delicious ghost story; add in a complex romance, a few heartbreaking surprises, and a passionate act of sacriﬁce, and this becomes an exquisitely haunting book. (March)

Gibney, Shannon. Dream Country. Dutton. Gr. 7-12
This intergenerational narrative weaves together the stories of ﬁve people from various branches of their African family tree, tracing the tragedy and complexity of the African diaspora with intimate details while giving heed to its larger historical impact. (September)

Hesse, Monica. The War Outside. Little. Gr. 7-10
The story of Haruko and Margot, two girls ﬁnding tentative friendship behind the barbed wire fence of a family internment camp in Texas, will thrill fans of Code Name Verity with its historical drama and stunning reveals. (September)

Ireland, Justina. Dread Nation. Balzer + Bray/HarperCollins. Gr. 9-12
This genre-bending treasure is set in a reimagined American Reconstruction Era, complete with zombies and Black girls tasked to kill them, and it features the quick-witted, zombie-slaying, and ever-resourceful Jane McKeene as an irresistible heroine. (May)

Jackson, Tiffany D. Monday’s Not Coming. Tegen/HarperCollins. Gr. 8-12 Teenaged Claudia searches for her missing friend, Monday, in a story subtle in tension until it unleashes a stunning twist; Jackson effortlessly weaves elements of suspense and issues of race, class, and gender together into a thrilling narrative. (June)

McKay, Hilary. Love to Everyone. Simon. Gr. 5-9
McKay yet again shows a deft hand at storytelling, carefully balancing heartbreaking elements—including the loss of a parent and the onset of World War I—with lighter, joyful moments of friendship and humor as she follows young Clarry and several other characters as they make their way to adulthood. (September)

Parr, Maria. Astrid the Unstoppable; tr. from the Norwegian by Guy Puzey. Candle- wick. Gr. 4-6
Fans of classic literary heroines such as Anne of Green Gables or Pippi Longstocking will delight in the domestic adventures of bold and resilient Astrid, who pals around with an elderly neighbor and causes all sorts of mischief. (October)

Perkins, Lynne Rae. Secret Sisters of the Salty Sea; written and illus. by Lynne Rae Perkins. Greenwillow/HarperCollins. Gr. 2-4
Readers will long to feel the sand beneath their toes and hear softly lapping waves after spending time with young Alix while on her summer vacation; eight accessible chapters recall beach days, yummy sweets, and family time with a sense of wonder and appreciation. (May)

Selznick, Brian. Baby Monkey, Private Eye; written by Brian Selznick and David Serlin; illus. by Brian Selznick. Scholastic. Gr. 1-3
Baby Monkey has some culprits to track down, and he does so adorably in this low- word-count, high-drama chapter book that will appeal to youngsters just moving past picture books (they’ll be delighted by Selznick’s illustrations) and older readers, who will feel a true sense of accomplishment as they hunt down clues along with the lovable sleuth. (March)

Thomas, Leah. When Light Left Us. Bloomsbury. Gr. 7-12
Fans of magical realism and especially A. S. King will ﬁnd themselves entirely taken by this story of the three Vasquez siblings, who are recovering from their time with what may have been a parasitic alien. (March)

Blumenthal, Karen. Bonnie and Clyde: The Making of a Legend; illus. with photographs. Viking. Gr. 7-12
Blumenthal pulls back the curtain on the oft-romanticized outlaw couple, revealing the circumstances and personalities that drove them to a life of crime and the personal tragedies behind the bold heists and daring getaways. (September)

Hockney, David. A History of Pictures for Children: From Cave Paintings to Computer Drawings; by David Hockney and Martin Gayford; illus. by Rose Blake and with photographs. Abrams. Gr. 4-9
This adaptation of Hockney and Gayford’s adult work is a lively, curious, and enlightening discussion between the two authors that sheds an unusually informed light on making art from cave paintings to computer graphics. (November)

Hoose, Phillip. Attucks!: Oscar Robertson and the Basketball Team That Awakened a City; illus. with photographs. Farrar. Gr. 6-10
You don’t need to be a basketball diehard to be utterly entranced by Hoose’s breath- less recounting of the 1950s state championship run of Attucks High School in Indianapolis, a team that captivated the city with its players’ skills but divided it on issues of race and segregation. (October)

Jarrow, Gail. Spooked!: How a Radio Broadcast and The War of the Worlds Sparked the 1938 Invasion of America. Calkins Creek, 2018. $18.95 Gr. 6-10
In a sea of modern “fake news,” readers may be intrigued by Jarrow’s recounting of one of the most successful and largely unintentional attempts by media to pull the wool over their audience’s eyes. (July)

Jenkins, Martin. Bird Builds a Nest: A First Science Storybook; illus. by Richard Jones. Candlewick. 3-6 yrs
A lesson on science and physics is stealthily deployed in this visual treat featuring a mama bird and her efforts to build a comfy nest for her little ones. (January)

Krosoczka, Jarrett J. Hey, Kiddo; written and illus. by Jarrett J. Krosoczka. Graphix/ Scholastic. Gr. 7-12
This graphic memoir of Krosoczka’s complicated childhood captures both the trauma of family toxicity but also the love and affection that can coexist with dysfunction; a smoky palette and informal linework emphasize the ambiguity of changing relationship dynamics. (November)

Partridge, Elizabeth. Boots on the Ground: America’s War in Vietnam; illus. with photographs. Viking. Gr. 7-12
The political is made intensely personal in this collection of edited interviews with American military personnel interspersed with chapters about the presidents and top brass during the Vietnam War. (April)

Rosenstock, Barb. Otis and Will Discover the Deep: The Record-Setting Dive of the Bathysphere; illus. by Katherine Roy. Little. 5-8 yrs
Otis Barton and William Beebe’s efforts to explore the depths of the ocean are captured in this compelling picture book with tightly plotted text and splendidly evocative illustrations. (May)

Saedi, Sara. Americanized: Rebel without a Green Card; illus. with photographs. Knopf. Gr. 8-12
Saedi’s bubbly, witty memoir covers the high and low points of growing up in the 1980s and 1990s as simultaneously an undocumented Iranian immigrant and an all-American girl. (February)

Sidman, Joyce. The Girl Who Drew Butterflies: How Maria Merian’s Art Changed Science; illus. with photographs by Joyce Sidman et al. Houghton Mifflin Harcourt. Gr. 5-8
Naturalists and budding bug experts will discover a wealth of information here, from detailed period artwork, to Merian’s own illustrations and boxed quotations, to photographs of insect metamorphosis, all packaged in an accessible text that describes the life of the eighteenth century artist and amateur scientist. (February)

Clarke, Maxine Beneba. The Patchwork Bike; illus. by Van Thanh Rudd. Candle- wick. 4-8 yrs
A little girl and her brothers living in a “mud-for-walls” house “at the edge of the no-go desert” delight in the bike they made from bits and bobs in a story that gains provocative dimension from art that references contemporary cultural movements and flashpoints. (October)

Goldstyn, Jacques. The Eleventh Hour; written and illus. by Jacques Goldstyn; tr. by Anne Louise Mahoney. Owlkids. Gr. 5-8
This powerful and accessible picture book brings home the impact of the Great War through a story of two lifelong friends. (November)

Hesse, Karen. Night Job; illus. by G. Brian Karas. Candlewick. 4-7 yrs
On Friday nights, our young narrator and his father get on Dad’s motorcycle and head out to Dad’s janitorial job at a school where kiddo hangs out as Dad cleans; Karas’ friendly artwork makes the most of the nighttime atmosphere and dramatic spills of artiﬁcial light. (September)

James, Matt. The Funeral; written and illus. by Matt James. Groundwood. 4-7 yrs
A young girl attends her great-uncle’s funeral in an unexpectedly upbeat story about a kid’s-eye perspective on the funeral experience; luminous art vividly conveys the combination of serious occasion and beautiful spring day. (June)

Lê, Minh. Drawn Together; illus. by Dan Santat. Disney Hyperion. 4-8 yrs
When language barriers block connection, a boy bonds with his Thai grandfather as they make art together; Santat’s illustrations blending Western and Asian elements in a visual language that speaks to readers on both sides of artistic, generational, or cultural divides. (June)

Love, Jessica. Julián Is a Mermaid; written and illus. by Jessica Love. Candlewick. 4-8 yrs
Kids who revel in dress-up and costume will ﬁnd a kindred spirit in Julián, whose pretend play is inspired by three women dressed as mermaids he sees on the subway; illustrations glow with Afro-Caribbean flair as detailed patterns and vibrant colors set the scene. (May)

Morales, Yuyi. Dreamers; written and illus. by Yuyi Morales. Porter/Holiday House. 5-9 yrs
In this narrative addressed to her son, the author-illustrator describes the experience of coming to the U.S. with him when he was just a baby; Morales frames her story of hope, creativity, and love of books with luminous mixed-media illustrations, perhaps inspiring viewers to artistically tell their story as well. (October)

Murguia, Bethanie Deeney. Do You Believe in Unicorns?; written and illus. by Bethanie Deeney Murguia. Candlewick. 3-6 yrs
Why is that white horse wearing a tall hat in the middle of its forehead? Surely, it’s not a unicorn . . . right? This gleefully tongue in cheek tale invites readers to believe the impossible and may inspire kids to make up their own fantasy stories featuring mythic—or not?—creatures. (September)

Woodson, Jacqueline. The Day You Begin; illus. by Rafael López. Paulsen/Penguin. 6-9 yrs
This book directly addresses its audience in describing the experience of starting out at a new school, offering comfort to children who ﬁnd themselves in new situations and reassuring them of their worth and value; vivid illustrations emphasize the perspectives of individual kids. (September)