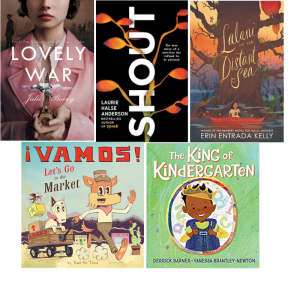 It’s that reflective time of year again, when we cast our eyes back to the books of the past twelve months and see which ones hold magic for us from this perspective.  It was an especially glorious year for history, both fiction and nonfiction, while the picture books offered superb originality. You may not have known you needed a book about the Greek gods and World War I, the birth of food safety laws, or a wolf merchant’s trip to the marketplace, but 2019 proves that we all do.

Allen, Kate. The Line Tender. Dutton. 2019. Gr. 5-8
Be sure to bring tissues to this well-crafted weeper in which twelve-year-old Lucy processes her fresh grief over a lost friend by following the passion of her deceased mother, tracking and studying sharks. (April)

Berry, Julie. Lovely War. Viking. 2019. Gr. 9-12
In Berry’s triumphant piece of historically focused fiction, the Greek goddess of love offers up a tale of four people brought together during World War I, the devastating toll it takes on them, and their hopeful resilience. (February)

Griffin, Sarah Maria. Other Words for Smoke; illus. by Magdalena Valcarcel Reyes. Greenwillow/HarperCollins. 2019. Gr. 9-12
This genre-defying book traverses timelines and dimensions when brother and sister Rossa and Mae visit their aunt in Ireland and uncover the legacy of a tragedy so awful it literally ripped a hole in the universe. (February)

Kelly, Erin Entrada. Lalani of the Distant Sea; illus. by Lian Cho. Greenwillow. 2019. Gr. 4-6
Young Lalani hopes to find a cure for her ailing mother when she travels to the fabled island of Isa; intertwined with her journey are the tales of Ziva, a restless spirit, and Hetsbi, a young village boy, giving this enthralling story broad appeal. (September)

King, Amy Sarig. The Year We Fell From Space; illus. by Nina Goffi. Levine/ Scholastic. 2019. Gr. 4-7
Twelve-year-old Liberty is left unmoored and unsure, especially of herself and her own mental health, when her father moves out in this insightful, quietly compelling look at depression and family dynamics. (October)

Lại, Thanhhà. Butterfly Yellow. Harper. 2019. Gr. 8-12
Lai weaves a tender and at times unexpectedly buoyant tale of healing with the story of eighteen-year-old Hằng and her search for her baby brother after fleeing from Vietnam. (September)

Mann, J. Albert. What Every Girl Should Know: Margaret Sanger’s Journey. Atheneum. 2019. Gr. 7-10
In this highly accessible fictionalized account of reproduction rights pioneer Margaret Sanger, Mann focuses on her early life, providing an absorbing look at the deeply personal reasons that eventually led to her taking up such a politically fraught cause. (January)

Sepetys, Ruta. The Fountains of Silence. Philomel. 2019. Gr. 8-12
The lives of four teenagers intersect in 1957 Spain with both tragedy and love in a tale made even richer by Sepetys’ use of primary sources and the book’s wealth of back matter. (October)

Tamaki, Mariko. Laura Dean Keeps Breaking Up with Me; illus. by Rosemary Valero-O’Connell. First Second. 2019. Gr. 8-12
The graphic novel format works particularly well here, with manga-esque styled characters and a simple palette, and the book portrays the toxic relationship between love-smitten Freddie and her on again/off again (but always awful) girlfriend Laura Dean with authentic realism. (May)

Thomas, Angie. On the Come Up. Balzer + Bray. 2019. Gr. 9-12
In her follow up to The Hate U Give, Thomas brings complex characters, powerful emotion, and electrifying rhymes to this story of Bri, a sixteen-year-old girl aspiring rapper whose success is marred by racism and threats. (February)

Yates, Alexander. How We Became Wicked. Dlouhy/Atheneum. 2019. Gr. 8-12
Yates skillfully crafts this dystopian horror story in which the majority of humans have turned into violent sociopaths, and teenagers Astrid and Natalie must figure out how to survive; the standard setup takes a surprising turn and packs a mean punch, leaving readers reeling. (June)

Anderson, Laurie Halse. Shout. Viking. 2019. Gr. 9-12
Twenty years after her groundbreaking novel Speak, Anderson shares her own experience with sexual trauma in this powerful free-verse memoir that serves as both a calling out of and a call to action against gender violence and harassment. (March)

Barnett, Mac. The Important Thing about Margaret Wise Brown; illus. by Sarah Jacoby. Balzer + Bray. 2019. 6-10 yrs
Kiddos who cut their reading teeth on Goodnight, Moon will appreciate this celebration of Brown’s works, which looks at their place in children’s literature history and their place in youngsters’ hearts throughout the years. (May)

Bryan, Ashley. Infinite Hope: A Black Artist’s Journey from World War II to Peace; written and illus. by Ashley Bryan and with photographs. Dlouhy/Atheneum, 2019.  Gr. 7-12.
The legendary author/illustrator turns his gaze to his World War II experience in the US, UK, and France in this fascinating nontraditional narrative comprising his wartime letters and artwork with some added explanation and period images; it’s a very personal take on war from a man who was inspired by his experience to study peace.

Elliott, David. Voices: The Final Hours of Joan of Arc. Houghton Mifflin Harcourt. 2019. Gr. 10 up
Elliott’s creative historical account of the fifteenth-century peasant/visionary/warrior/martyr plays out in a series of poems from the perspectives of Joan and the persons, objects, and intangible forces that brought her to her death. (March)

Grimes, Nikki. Ordinary Hazards: A Memoir; illus. with photographs WordSong/Boyds Mills. 2019. Gr. 8-12
In this searing free-verse memoir, Grimes offers readers an exploration of memory and storytelling, a visceral account of trauma and dysfunction, and, ultimately, a fiercely hopeful tribute to the art of creation and the salvation found within it. (October)

Jarrow, Gail. The Poison Eaters: Fighting Danger and Fraud in Our Food and Drugs. Calkins Creek. 2019. Gr. 6-12
Jarrow’s no-nonsense tone mixes with wealth of riveting anecdotes to create a surprisingly heady brew of consumer history with this skillful examination of the development of the FDA. (October)

Miller, Sarah. The Miracle & Tragedy of the Dionne Quintuplets; illus. with photographs. Schwartz & Wade. 2019. Gr. 7-12
Miller deftly examines the historic media frenzy around the birth of Dionne quintuplets in in 1934 and analyzes the legacy of its lore; readers living in a voyeuristic, reality TV world may be surprised to find that the obsession with celebrity families is not a new phenomenon. (July)

Newman, Carey. Picking Up the Pieces: Residential School Memories and the Making of the Witness Blanket; written by Carey Newman and Kirstie Hudson; illus. with photographs Orca. 2019. Gr. 8-12
In this riveting narrative, Newman traces his creation of the Witness Blanket, an art project funded by the Canada’s Truth and Reconciliation Commission to commemorate the Indigenous children placed in the government’s residential schools from the 1870s to the 1990s. (October)

Sheinkin, Steve. Born to Fly: The First Women’s Air Race across America; illus. by Bijou Karman and with photographs. Roaring Brook. 2019. Gr. 7-12
In this recounting of the 1929 Women’s Air Derby, Sheinkin traces the origins of the participants and then chronicles the harrowing cross country race; the narrative soars with skillful prose but is further elevated with period photographs and a wealth of backmatter. (September)

Alexander, Kwame. How to Read a Book; illus. by Melissa Sweet. Harper. 2019. Gr. 2-5
Book lovers will relish this this stunningly illustrated poem that celebrates the joys of reading with imagistic musings and a cheerful dreaminess. (June)

Barnes, Derrick. The King of Kindergarten; illus. by Vanessa Brantley-Newton. Paulsen/Penguin. 2019. 4-7 yrs
Lively, playful art and an unflaggingly cheerful protagonist make a delightfully positive celebration of the first day of kindergarten that will reassure and motivate youngsters as they graduate from preschool and move on to bigger and brighter things. (July)

Barnett, Mac. Circle; illus. by Jon Klassen. Candlewick. 2019. 4-7 yrs
Spare text and minimal shape-focused art turns into a thought-provoking and authentic story of kid friendship as Circle, Triangle, and Square play together, break some rules, get scared, and wonder about the unknown. (February)

Doerrfeld, Cori. Goodbye, Friend! Hello, Friend!; written and illus. by Cori Doerrfeld. Dial. 2019. 4-7 yrs
This delightful and insightful picture book walks viewers through the rhythms of life’s comings and goings in the story of Stella and Charlie’s friendship; expressive art details the passing of seasons and the changes that come with them. (July)

McAnulty, Stacy. Max Explains Everything: Soccer Expert; illus. by Deborah Hocking. Putnam. 2019. 4-7 yrs
Kids who remember that first soccer season and the distractions that are so much more alluring than running the field will find Max’s enthusiastic ineptness a cause for chuckles and face-palming. (February)

Quintero, Isabel. My Papi Has a Motorcycle; illus. by Zeke Peña. Kokila/Penguin, 2019. 4-7 yrs
Daisy’s dad takes her through their city via his trusty motorbike in this sweet tribute to father/kiddo time; the energetic art lights up the narrative details of their ride, echoing the style of graphic novels. (May)

Raúl The Third. ¡Vamos!: Let’s Go to the Market!; written and illus. by Raúl the Third. Versify/Houghton Mifflin Harcourt. 2019. Gr. 2-4
As Lobo and Bernabé make their deliveries to vendors at the Mercado, readers are treated with a walk through the hustle and bustle of the marketplace as well as Raúl the Third’s zany, stylized artwork in this bilingual gem.  (March)

Shannon, David. Mr. Nogginbody Gets a Hammer; written and illus. by David Shannon. Norton. 2019. 6-9 yrs
Chaos ensues when the weird and wonderful Mr. Nogginbody (whose body is, as his name suggests, a head) gets hold of a hammer and thinks problem can be solved with a hearty thwack. (November)

Smith, Sydney. Small in the City; written and illus. by Sydney Smith. Porter/Holiday House. 2019. 4-7 yrs
The narrator’s reflective tour of the city, describing a path through what can be overwhelming sensory input, turns out to be focused on a lost cat in this thoughtful take that also speaks to many young children’s experience of the busy world. (September)

Soman, David. How to Two; written and illus. by David Soman. Dial. 2019. 2-5 yrs
Part counting book and part socialization celebration, this clever narrative builds on simple text that moves from “How to one” to “How to ten”; the illustrations solidify the concept as a single kid at a playground is joined by more and more friends. (January)