See this month’s Big Picture (below) for review. 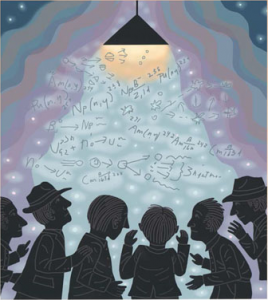 A peaceful, remote boys’ school is abruptly evacuated and closed under government order when “the principal was told that his school was needed for important government work.” Then come the scientists, “driven to this secret location, which has no name,” and the support workers, “sworn to secrecy about the existence of this place.” Scientists make calculations; they are under time pressure and apparently in a rivalry with other scientists, working with elements that “can be turned into something with enormous power.” At last it’s ready. There’s a tower, a Gadget, a bunker, a countdown. Then a blast like no other blast known.

The point at which readers recognize the nature of the Gadget and the Secret Project—or whether, in fact, they do recognize it before Jonah Winter’s revelatory endnote—makes this clever exposition of the World War II development of the atomic bomb at Los Alamos an unusually effective and highly individualized reading experience. Steve Sheinkin’s Bomb (BCCB 10/12) delivered this story with heart-pumping pacing and nail-biting detail, but this picture-book gem takes the opposite approach, reducing the historical episode to its elemental, quasi-folkloric core, and shifting the audience into the role of an average, early 1940s American Joe, who has been kept in the dark about the nation’s lethal program and is about to discover the unimaginably high cost of winning a war.

Jonah Winter’s text is accessible to a young audience, and children who know nothing of the Manhattan Project (never called by that name here) will thrill to a conspiracy story with an ending so thunderous that it initially resonates as fiction rather than fact; the picture-book format may even reinforce that naïve perspective. Those who know what’s coming, however, see in the visual interplay of mystery and innocence something very different. Jeanette Winter’s pictures move eerily and seamlessly among the sun-drenched, wide open New Mexico landscape where artists come to paint and the tenebrous, hidden rooms and labs in which scientists—portrayed as ebony figures outlined in gray—carry out their top secret agenda. The blast itself mushrooms in a four-page, four-panel sequence, followed by a concluding double-page spread of pitch black. There’s no conclusion, no “The End,” because of course there is no ending—just the imminent and horrifying disclosure of the Secret Project at Hiroshima and Nagasaki, and the nuclear legacy with which we now live.

A picture book’s powerful potential to reach multiple audiences at varied levels of prior knowledge and understanding is on full display here, and adults tasked with shepherding youth of all ages through the darkest episodes of history will appreciate so moving and versatile a guide. The youngest audience will learn the facts, but the sinister implications a secret government project and the unimaginable consequences of covert research will impel an older readership to confront their grim inheritance of “15,700 nuclear weapons still in existence throughout the world,” and to work toward a “day that number will be zero.”

Art from The Secret Project © 2017 by Jeanette Winter. Used by permission of Beach Lane Books.