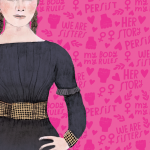 What Every Girl Should Know: Margaret Sanger’s Journey
by J. Albert Mann

There’s no shortage of historical ﬁction revolving around plucky girls. The prospect of an arranged marriage, an aversion to domestic chores, or an aspiration to do “men’s work” drives them from home; armed with determination and blessed with luck, they variously hike up their skirts, shear off their hair, thumb their noses at patriarchy. Wars and pirate ships and newsrooms embrace them; it all seems so easy. And so it is, with protective authors securing their futures. In this novelization of the early years of Margaret Louise Higgins Sanger, pioneering champion of birth control and women’s reproductive rights, our plucky heroine’s future has passed into historical fact, but the mark she will make in the world is slyly never mentioned.

Sanger is not regularly spotted in middle and high school curricula, where she might draw parent ire or clog up nuts and bolts sex ed with a history lesson. Nor does Mann’s book formally introduce her, and a casual reader might easily scan the subtitle without even realizing Sanger was a real person. Instead, readers are tossed directly into Margaret Higgins’ large, struggling family in late nineteenth century Corning, New York. Her mother, suffering from tuberculosis, is perpetu- ally pregnant (narrator Margaret observes, “I’ve almost never known my mother alone in her own body”), and whatever her mother’s vision of marriage to charm- ing, cerebral Michael Higgins might have been, she’s now reconciled to running a household while coughing up blood, and birthing, losing, and nursing babies—often simultaneously. Margaret’s older sisters shine at domesticity, and although Maggie does as she’s told, she lacks their skills at housework and childcare. She prefers to spend time with her father, who encourages her to read liberal social philosophers and indulges her as a sort of sidekick on his outings. It’s all very flattering, but as Maggie ages she realizes both the fallout from her father’s enthusiasms (he loses his job and his family becomes local pariahs) and his hypocrisy. Spouting battle cries for freedom and women’s rights is ﬁne, but he still wants to have his meals cooked and children cared for as he sits in his chair and drinks.

As Maggie sees her parents with clearer eyes, she also comes to appreciate the sacriﬁces her older siblings make to keep the family afloat. One by one, the boys drop out of school to work in the glass factory and the girls to work as maids, even forgoing their own dreams to foot the bill for Maggie’s tuition at a private school, where she thrives until funds run out. After a brief, disappointing stint as a teacher, Maggie returns home at her father’s summoning to keep house while her mother lies dying. During that critical year, 1899-1900, she is torn by sorrow for losing the mother she never fully understood, rage against her indolent father, guilt over shirking responsibility when her siblings have given so much, and the palpable need to get the heck out of Corning and make a life for herself. She leaves. And here Mann’s storytelling ends.

A substantive historical note picks up the story, noting the highlights of Sanger’s career—openly crusading for family planning and disseminating informa- tion on sexual education and contraception at a time when this was not only socially unacceptable but illegal. Mann also contextualizes Sanger’s position on eugenics, noting that Sanger is often misquoted or purposely misunderstood even today by people who oppose her mission. Of course, not every reader stays around for ap- pended notes, and it is a tribute to Mann’s narrative approach that a reader who closes the cover without learning why Margaret Sanger is historically important will have seen through Maggie Higgins’ eyes how marriage snuffed out most women’s dreams in families of the working poor, and how even escape took an emotional toll that plucky girl novels too often overlook.

Cover art from What Every Girl Should Know: Margaret Sanger’s Journey © 2019 by Lisa Congdon. Reproduced by permission of Atheneum Books for Young Readers.