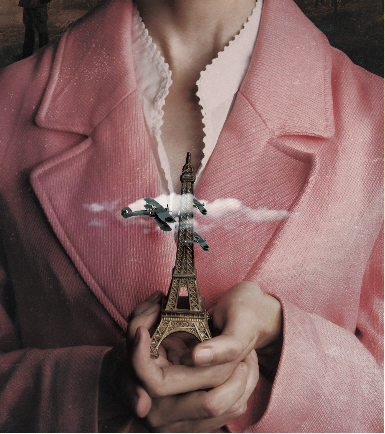 Love. It is the backbone of many stories and it can turn the world on its head in a moment, and no one—human or divine—knows this better than the Greek goddess Aphrodite. In Berry’s triumphant piece of historically focused fiction, the goddess proves that while war, art, and death have their place in the world, she’s got enough tricks up her sleeve to best them all.

When she is caught in the arms of Ares by her husband, Hephaestus, Aphrodite offers up a tale of four people brought together during World War I as a justification for her actions, proving with her story that true love is the realm of mortals, and gods and goddesses can make no claim to its power. She begins her story with young James’ meeting of Hazel in London, 1917, just a few days before his deployment; the two fall desperately in love, and Hazel joins the YMCA relief effort in Saint-Nazaire, France, if not to be close to James than to at least do her part in the war. The two exchange ardent letters and even rendezvous in Paris while James is on leave. Also in Saint-Nazaire is Aubrey, jazz pianist in the Army Band of the all Black 369th Infantry Regiment, who is falling for Colette, a singer orphaned when Germany invaded Belgium; she, in turn, is surprised to find herself opening up her heart in ways she thought she never could.

Hazel and James may be the picture of first love, starry-eyed and innocent, but James is soon learning to be a sniper on the front lines, so Ares takes over narrating most of James’ scenes. The musical deity Apollo lends his voice to Aubrey’s experience as a pianist, but to do so he must also tell of Aubrey’s many encounters with racism and bigotry. Hades makes an appearance in all of their tales, but most terribly in Colette’s flashbacks, when she loses her family during the Rape of Belgium. Aphrodite sees it all, however, and when the other gods have had their time with her mortals, she is the one to ultimately shape their fate, bringing them back together, reminding them of who they were before the war and who they can be now.

The tale-within-a-tale setup is brilliantly effective here, with the human drama amplified by the addition of divine narrators, and the gods’ voices play appropriately to their known character: Ares brings either anger or indifference, Apollo radiates charm, and Hades evinces a quiet authority. Among both gods and mortals, however, Aphrodite is the true star of this show, bold in her certainty of her mortals’ hearts, fierce in her protection of them, and glorious in her defiant insistence that love is more than “silly romances” (Ares’ words) and it cannot be invalidated or overrun by violence, arrogance, or death.

Matching Aphrodite in beauty and elegance is Berry’s exquisite prose, as she lights up her settings—battlefronts, Paris, even a Manhattan apartment—with an electrifying lyricism, while leaving the briefest, barest sentences to create profoundly emotional moments. In any other hands, this might seem off balance, but the space she affords her characters to yearn, love, and grieve zeroes in on the weight of the scene, stripping it of pageantry to its most crystalized, pure sentiment. When, for example, Colette reveals to Aubrey the horrific murders of her family and the razing of her village, it is a scene merely half a page, without dialogue and little detail but with arresting power in its quietness. Similarly, Hazel’s giddy reaction to James’ smile and her decision to be with him is summed up thusly: “It was the dimples. Empires have swiveled on less.”

This is a moving, brutal, and yes, lovely, story of the ways in which people find hope in a world gone mad, and why Love remains powerful, even when we mortals are at our worst. (See p. 247 for publication information.)