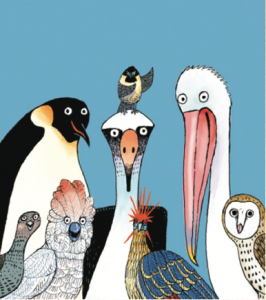 Poets, composers, and just about anyone who directs eye and ear skyward associate birds with the season of spring. Our March Big Picture heralds the season’s arrival with an avian celebration formatted for broad audience appeal. Readers attuned to the cheeps and warbles that mark grim winter’s retreat will want to cast their attention to Superlative Birds.

Part poetry and part information, Bulion’s offering appropriately begs comparison to Joyce Sidman’s similarly constructed Newbery Honor winner, Dark Emperor (BCCB 9/10). Like Sidman, Bulion is an accomplished wordsmith presenting complementary views of her highlighted residents of the natural world, appealing through poetry to the reader’s emotive, sensory side and through prose description to her or his inquisitive, cerebral side. Illustration is engrossing, imaginative, instructive, and deftly calibrated to the tone of the text, and Bulion and Meganck use this approach to broadly examine some of Nature’s peculiar particularities.

There are myriad way to claim “-est” in the bird world, and Bulion singles out traits that introduce birds both familiar and lesser known to enthusiasts. Plenty of children recognize that the peregrine falcon clocks in as fastest, or that an emperor penguin is a world champ diver, or that the barn owl is nonpareil in the hearing department. Here, though, readers add to their fact caches such delights as the longest-toed (for body weight) jacana, whose heft is distributed so neatly it can walk on lily pads; the American woodcock (locally nicknamed “timberdoodle”), whose top-of-the-head mounted eyes give it the widest field of vision and an advantage in seeking prey and avoiding predators; the orange-footed scrubfowl, whose record-setting huge nests are placed on the ground and can be augmented or diminished in depth to control heat for the eggs incubating within. Although the various claims to fame are obvious in Bulion’s verses, the science notes that accompany the poems expand the information and responsibly point out areas of ornithological debate: What could possibly be the advantage to the tinamou’s iridescent eggs? Can the albatross shut down part of its brain to snooze during flight? How can you make a definitive award for the “biggest loudmouth” when decibel levels are measured at varying distances from recording devices? Scientific perplexities aside, there’s enough trivia here to stoke middle grade know-it-alls.

Even readers who are merely on fact-finding missions, though, will be impressed by the breadth and engagement of Bulion’s chosen poetry forms. An addendum of chatty notes not only identifies the forms (and merits applause for appreciative English teachers), but also discusses why forms were selected—often in tribute to the human culture within a bird’s range. The four-line tendi, used in Swahili poetry, is deployed for the sub-Saharan quelea; the soledad form is a nod to Spanish-speaking regions where jacana thrive; the Australian lyrebird’s flamboyant mating ritual is cleverly (and singably) set to the tune of “Waltzing Matilda.” In some poems rhythm and cadence are matched to bird movement, as in the buzzy, clipped couplets of the bee hummingbird’s verse, or the swift and streamlined tanka that, like its peregrine subject, “embodies/ the shape of speed.” Meganck’s accompanying images, light-hearted but rife with salient detail, do double duty as a buoy for younger readers intimidated by poetry and/or science and an invitation to browsers scanning for quotable favorites.

Many schools have moved from STEM toward STEAM initiatives, recognizing that Arts pull easily in harness with Science, Technology, Engineering, and Math, not just as aesthetic embellishment or pleasing design but also in a valid and valuable way of exploring the natural world. In works such as Superlative Birds, the collaboration of poetry and science invites children of varying reading preferences, learning styles, and worldviews to enter nature study through their own chosen door. And as long as teachers keep curricular strategy on the q.t., young readers need never suspect there’s an educational bonus here to their enjoyment of a “really fun read.”