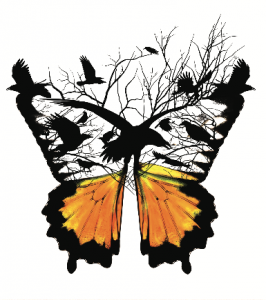 Humans are storytellers by nature, seeking to make meaning out of the chaos of the world and give our existence identity. This characteristic can be especially urgent in survivors of trauma, victims who, if and when they find their voice, can narrate their stories into ones of recovery and healing. A story requires a listener, though, and the traumatized—be it an individual or an entire people—are too often ignored or dismissed, and left with festering wounds that will last generations. The two Australian Aboriginal girls at the center of this The Things She’s Seen discover just how poisonous silencing can be and how much power it takes to finally break through it.
Beth Teller’s decision to stick around after she died in a car accident and take care of her detective father is backfiring: instead of finding comfort in being able to see and hear his ghostly daughter, he’s just reminded that Beth will never get any older than fifteen. Intent on shaking him out of his grief, she pushes him toward his latest case, which has brought them to a small Australian town where a home for troubled children has burned down. The only potential witness, an orphaned teen girl named Isobel Catching, who prefers to be called just Catching, was found wandering drugged up around a nearby river. She tells a fanciful story of monsters, the Fetchers, the Feed, and the Crow, and her experience in the “beneath-place”; meanwhile, Beth and her dad learn of a possibly related missing persons case from decades before. When the children’s home director and nurse, and later the town’s sheriff, are found dead and the wealthy benefactor of the home clams up, Beth begins to think there might be something to Catching’s stories after all.
Beth and Catching share narration, and Catching voices her experience with spare, evocative free verse, as the Fetchers offer her up to the Feed again and again to “steal her colors”: “He holds up his hand. Colors drip from his fingers./ As if I’m bleeding rainbows/ He eats what’s inside our insides.” Repeating the names of her grandmother and mother like an affirming mantra, Catching endures by telling herself the stories of the strength of the women in her family, who were stolen from their Aboriginal families by the Australian government. Catching’s rendering her pain via a fantasy world is an obvious coping mechanism for her, but it also acts as an authorial device that crystalizes an enormous cultural tragedy into one singular—though nonetheless horrific—crime. Readers don’t need to know the gory details of Catching’s experience to understand its terrible reality, a reality that echoes, perhaps not in specifics but certainly in trauma, the tragedies suffered by her relatives and so many Aboriginal women under colonization and contemporary Australia’s systematic racism.
Beth’s prose voice, on the other hand, is sometimes naïve, making her a soft foil to Isobel’s hard edges, and it’s therefore especially heartbreaking when Beth finally puts the clues together and realizes the full extent of the violence Catching suffered. She might be a Teller in name, but Beth and her father are the listeners of Catching’s tale, bearing witness even when they realize Catching is beyond any actionable help and doing their best to make sure her story is known and its implications reckoned with.
Brother and sister Kwaymullina, both from the Palyku people indigenous to Western Australia, highlight the power of storytelling and how it sustains us and heals us as we tell, listen, and share. Catching’s telling heals her pain, but it is also her remembering the tales her mother told her that allow her to endure the Fetchers and the Feed: “When I was in the beneath-place, it was stories that got me through. Stories that brought me home.”

Cover art from The Things She’s Seen © 2019. Reproduced by permission of Alfred A. Knopf Books for Young Readers.