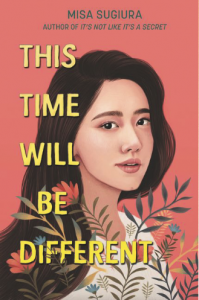 This Time Will Be Different

CJ Katsuyama is sure, with the “boundless field of bad decisions and disappointing performances that have been my life,” she’s not a source of pride to her high-achieving venture capitalist mother. Her mother even works at the firm owned by the McAllister family, despite the fact that it was those very McAllisters who snapped up the Katsuyama family flower-shop business for pennies when the Katsuyamas were sent into internment camps during World War II. Meanwhile, CJ and her aunt Hannah work at that since repurchased family business, trying to make a go of the struggling concern (named “Heart’s Delight”), and they’re horrified when CJ’s mother considers selling it. CJ’s got some social pressures as well: her best friend, Emily, is beginning to respond to the overtures of the girl CJ hates, and just as CJ’s making some headway with her long-term crush, Shane, she’s starting to have feelings for Owen, the guy who helps out at the florist shop.

We’ve had fiction and nonfiction about the Japanese-American internment experience before, but it’s rare to find a book exploring the fruits of that injustice three-quarters of a century later. It is, however, a defining experience both for the family (“Katsuyamas never quit” is the family motto) and for the Northern California town; even CJ’s school is named after the wartime McAllister (as are the local hospital and library) who stirred up anti-Japanese hatred and cheaply snatched up acres of Japanese-American land. It’s left a plausible division between CJ’s emotional aunt (who believes in flower magic, and who disdains CJ’s mother as caring only about money) and CJ’s fiercely pragmatic mother, who fought her way through a sexist and racist industry to raise CJ (and support Hannah) on her own, and who would rather sell the business to the McAllisters for $3 million, past be damned, than continue to pay for “essentially a hobby that costs tens of thousands of dollars a year.”

Sugiura masterfully combines that and the other plot strands into an engaging and legible synthesis in CJ’s narration. CJ is a sympathetic, flawed, highly credible character: for fear of disappointing further, she shies away from effort and embraces Hannah’s undemanding company, and she’s simultaneously naïve (especially about her own family’s dynamics and finances) and judgmental (especially about her peers). The book manages to make her appealing despite her frequently sour take on events; her strong reactions are admittedly a mixture of principled and personal, and the book bracingly holds her accountable (Owen outright assesses her as “obsessed with your own shit and your own grudges”) for their impact. Characterization throughout is refreshingly complex, with nobody reduced to mere villainy or virtue; even the popular kids have thoughtful capacity, and CJ’s mother (in an elegant characterization) is a compelling figure.

The book explores history and its effects as it dives into contemporary issues of racism, appropriation, reparation, allyship, and intersectionality as the students campaign to change the name of the school from McAllister to Motohara, the farmer who forfeited his land during World War II, while keeping an effective balance between idealism and realism. Throughout, it is an astute look at privilege, power, and history in sometimes unexpected forms, and of how they play out in a family and among peers as well as in a country. Says CJ about the knotty legacy of her and her Japanese-American friends’ past: “We’re linked by our histories in a way that makes me sad and angry and proud at the same time. I’m not happy it happened, but the history and the link are part of me, so they’re precious.” That’s a complicated identity, and CJ is a beautifully complicated guide.

Cover art from This Time Will Be Different © 2019. Reproduced by permission of HarperTeen.