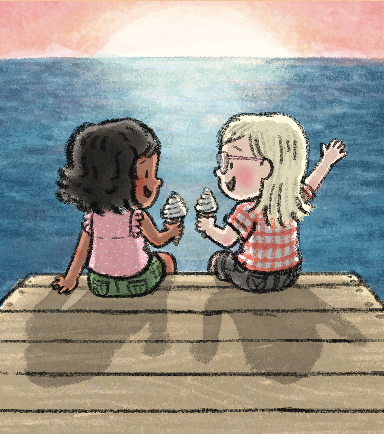 written and illustrated by Cori Doerrfeld

Life is full of comings and goings, and this picture book walks viewers through that rhythm in the story of Stella, a little girl who makes friends with her classmate and neighbor Charlie. It’s clear from the beginning that life’s ebb and flow can be emotional, as Stella anxiously clings to her mother as she bids her goodbye on the first day of school. At school, however, outgoing Charlie immediately greets Stella, Stella’s worried eyebrows gradually relax, and by the time the bus returns them both home, they’re fast friends.

Doerrfeld’s text chronicles that durable friendship in hellos and goodbyes, ranging from cheerful transitions (“Goodbye to outside . . . is hello to inside”) to slightly wistful developments (“Goodbye to snowmen . . . is hello to puddles!”) to genuine sadness (after Stella’s goldfish dies, “Goodbye to an empty bowl . . . is hello to a full heart”). The book, like the friendship, builds through those shared experiences, and then the text breaks its simple back-and-forth pattern for the culminating goodbye: “But sometimes, when you least expect it, a goodbye comes along that really feels like the end. Sometimes, goodbye is the last thing you want to say.” That’s because Charlie is moving away, and “Goodbye to holding tight . . .
is hello to letting go.” The rhythm picks up again when a new girl moving into Charlie’s old house means a new hello, but it’s clear that Charlie isn’t simply being replaced—letters are going back and forth between Charlie and Stella, and it remains to be seen just what Stella’s relationship with the new neighbor will be.

We’ve seen treatments of friendship loss before, but this turns that story into a tender and friendly exploration of life’s balance, deftly escalating from matter-of-fact changes to harder ones. It’s respectful of strong feelings, both negative and positive, but also confident of the emotional competence of its young protagonist in negotiating them. Ultimately, this is a mature philosophical concept—life is always dynamic and never static, and it is full of beginnings and endings—written in accessible terms.

The digital illustrations, with soft, thick charcoal-type lines and robust kid figures in expressive poses, add engaging particulars to the sentiment, helping concretize the theme with recognizable scenes and details. In addition, the art cleverly signals the passage of time as Stella’s puppy turns into a full-grown dog, and season follows season (though the kids stay roughly the same, which works for emotional continuity). It also metaphorically represents mood: it’s sadly raining the day Charlie’s family moves; then, though there’s been time enough in the interim for the exchange of letters, the day the new family moves in there’s a rainbow in the sky and drying puddles on the street from the previous downpour. The multiracial cast (sharp-eyed viewers may spot Stella’s South Asian last name on her letter from Charlie) and absence of gender indicators for bouncy, long-haired Charlie (sleek in some seasons, shaggy in others) further broaden the book’s relatability.

Overall, it’s a kind, stealthily original outing that may give perspective to youngsters facing life transitions or just make kids think about their own patterns of experience.