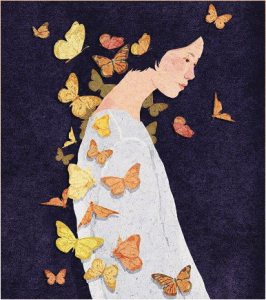 “Her brother is the only person left from her youth. Grandmother gone, Father gone, mother gone. Hằng never would have crossed the sea on a rotting fishing boat if he weren’t waiting for her.” So thinks eighteen-year-old Hằng, who arrives at her uncle’s house in Texas in 1981 after fleeing Vietnam and within a day heads out to find that younger brother, Linh, who’d been babylifted out of Vietnam years earlier. She finds a helper/patsy/driver in LeeRoy, a young guy determined to be a cowboy despite his academic upbringing, and together they end up at a ranch in Amarillo, where Hằng’s now eleven-year-old brother lives but doesn’t remember her and wants nothing to do with her. Hằng is devastated but unflagging, and she and LeeRoy are taken on as labor at the ranch, where she works her way through a summer of getting closer to her brother and negotiating her past and her present.

This is a new angle on refugee stories, where the focus is more often simply the wrenching departure or the establishment of a new life; Hằng has survived that departure and a savage pirate attack that left her mother dead and herself covered with scars, and her main goal now is the reconnection to the one piece remaining of her old existence. Outwardly all sharp angles and fierce determination, inwardly filled with love, longing, and grief, she is a heroine who elicits sympathy but resists pity. Flashbacks illuminate her steadily accumulating losses in Vietnam but also paint her as a young girl with a love of National Geographic magazines and dreams of the American West. (An emblematic scene between Hằng and LeeRoy involves an amusing argument over the theme song from The Good, the Bad, and the Ugly.) Lại writes with charm and spark, and she is especially original in her conveyance of Hằng’s limited English, transcribing it in Vietnamese syllables, which makes clear the struggle of mapping this difficult new language onto a sophisticated ability to communicate in her first tongue.

Focalization alternates between Hằng and LeeRoy, and while Hằng dominates, LeeRoy is a palpable presence, an eager young man unsuited to his dreams but possessed of a big heart and a doggedness that eventually make him a fixed reference point in Hằng’s uncertain landscape. Yet in a refreshing dodge of cliché, the climactic moment wherein Hằng faces her memory about the pirate attack, revealing the event in full to readers, is entirely internal. Rather than sharing her past with LeeRoy, she faces her own ghosts silently in his presence while she bids him ramble on, using his familiar loquacity as comfort and as an anchor to the present.

It’s heartbreaking that that present isn’t the one Hằng dreamed of; that “after six years and four months of plotting expecting saving hoping, she must accept Linh requires no rescue” and move him from the center of her life. Yet Hằng remains resilient and purposeful, characteristics that make her compelling and even heroic here as she reconciles her dreams and reality. Ultimately, this is a bittersweet yet hopeful story of letting go and finding new ways to come together. The bound book will include an author’s note about her development of the story.