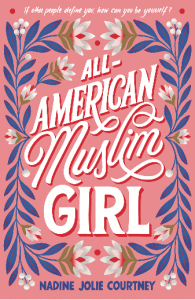 Identity is an important topic in many YA books, and it’s always a complicated concept involving family, appearance, faith, language, and other facets of daily existence. It’s even more complicated for those cultural hybrid young people whose hybridity is invisible, who traverse an America that sees them one way and a life and history that give them a different self. Dedicated to “those between two worlds denying classification,” Courtney’s novel accords authentic voice, dimension, and respect to such a girl negotiating her identity in the face of a complicated family and country culture.

Allie is the only child of a non-observing Muslim family; she’s also a don’t-make-waves people pleaser and a fair-skinned redhead of Circassian ancestry, so nobody in her well-heeled suburban Atlanta high school knows she’s a Muslim. She’s starting to question her practice of passing, however, and also to want to engage more with her heritage and faith. That’s a decision that opens up her world, as she connects with other Muslim classmates, dives into learning Arabic, and explores Islam. It also shakes up her community and her family, especially her rationalist, assimilationist father (“You pass as American, like everybody else, and you want to throw it all away?”), and it throws a big monkey wrench into the works of her budding romance with Wells, a boy whose father is a famous right-wing pundit.

Courtney, herself a Circassian Muslim, writes with thoughtfulness and immediacy about the quandary of Allie’s identity as she negotiates messaging from different directions. Allie is credible as a girl who’s developed the skill of being able to fit in throughout multiple family moves but has done so by, as she says, “trying on masks” and by knowing how to please adults (the opening scene, where she nices an Islamophobic airline passenger and flight attendant out of kicking her father off a plane, speaks volumes). Now, though, she’s keenly feeling the fragility of her sense of self (“After so many moves, so much change, so little stability, it’s started to feel like something’s . . . missing”) and especially her inability to communicate with her beloved grandmother, who speaks no English.

The book is particularly gifted at documenting Allie’s exploration of faith; her spiritual quest is treated with unusual depth and high readability, as she listens to and participates in reflective and organic debate by a Muslim women’s study group and by various family members and finds peace and meaning in shared ritual and prayer. It’s a genuinely fascinating spiritual journey that asks excellent questions—what does it take to be a good person of your faith? What’s the difference between conscientious dissent and apostasy? How do you negotiate differences of religious opinion with those close to you?—and the discussions in her study group will be compelling to the religious and secular alike. Practicing Islam roots Allie culturally in a way that she’s been craving (when she prays, she’s “finally part of something bigger than myself, part of the Ummah, and it is beautiful”), and she goes from dreading being outed as a Muslim to wanting to show the world that she’s proud of her faith (including experimenting with wearing a hijab). Even the relationship with Wells is depicted with nuance as Allie considers questions of complicity, risk, and honor.

Between its sharp and sympathetic exploration of identity and its interesting interrogation of the undertreated topic of faith, this will resonate with many readers, and it may encourage young people to consider their own spiritual paths.