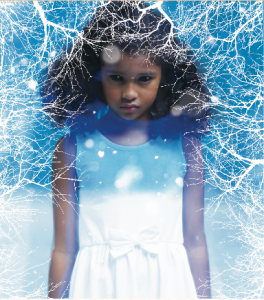 Middle-schooler Iris feels forgotten. Her parents are too busy with her little sister, Vashti, and they constantly command Iris to make accommodations for the four-year-old. As one of the few African-American kids in her class, she wonders if her school intentionally excludes her from activities; it certainly ignores the accomplishments of the step team she captains. Her teachers scold her for minor offenses, even when the popular white girls like Heather Benson are more deserving of their ire. Her mother assures her that fame and praise aren’t things she should seek out, but Iris can’t help feeling like the whole situation is unfair.

When the first snow of the year falls one night, Iris and her best friend, Daniel, discover the abandoned grave of a girl named Avery Moore, who died in 1956 when she was only eleven. Iris finds that Avery’s buried in a forgotten segregated graveyard, and decides that restoring Avery’s cemetery and bringing their town’s history of segregation to light might be the perfect way to get the recognition she deserves. Iris is beginning to suspect, though, that some of the superstitions she’s heard from Daniel’s eccentric grandmother, Suga, might be more than old wives’ tales, and she can’t help but hear Suga’s haunting song in her mind: “When you hear the winter wind/ that’s the sound of their screaming./ That’s when you’ll know/ spirits of the snow/ are ready for their feeding.” It doesn’t take very long before Iris’ dreams—they must be dreams, right?—are filled with visions of a strange girl with black eyes. Could the spirits of the snow be real? Are they coming for Iris?

In her debut novel, Brown tackles a wide variety of nightmares, from unsettled ghosts to the horrors of segregation and the death of a parent. All these troubles are woven together in a seamless story of friendship, family, and overcoming one’s fears. The prose is approachable and never flashy, allowing readers to get caught up in the characters and their struggles rather than adjectives and superlatives. Even with her straightforward style, Brown crafts a distinct and well-defined world. Her descriptions of the crisp, winter cold and swirling snow are crystal clear in the reader’s mind, and Iris’ family meals are almost realistic enough to taste. Similarly, characterization is deft. Daniel’s grief at the loss of his father is beautifully explored in his new resistance to basketball, a game he learned with his dad, and his attachment to his mother. Iris’ frequent battles with her annoying sister and her parents’ focus on the toddler are enough to make any older sibling roll their eyes and cringe sympathetically.

In amongst the dynamics of family and friends, Brown is forthright while discussing segregation and North Carolina’s racist past. This is especially well illustrated in Suga’s telling of the nine students who were the first Black kids to attend Iris’ formerly all-white school, an obvious nod to the accomplishments of the Little Rock Nine. Those pioneering students’ accomplishments are even more forgotten than Iris’ step team, and while knowledgeable horror fans will guess how the group is connected to the abandoned grave, Iris and the uninitiated reader are sure to gasp at the revelation. Brown makes excellent use of a wide variety of genre tropes, to the point where even when readers know what’s sure to happen next, they can’t help but greedily flip the page.

While the story is packed with mini-lessons on school integration, Jim Crow, and North Carolina’s history, there’s no shortage of spooks and twists in this chilling wintry tale. Fans of Neil Gaiman’s Coraline (BCCB 9/08) and Pat Cummings’ Trace (BCCB 3/19) will jump to grab a copy of this creepy new classic.