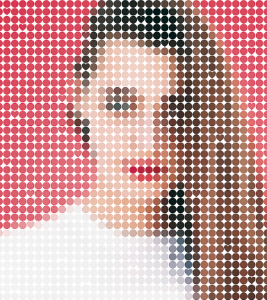 Youth literature generally isn’t as smart about social media as youth themselves are; it’s a world that the readership eats, sleeps, and breathes in a way the authors often don’t, so writers usually feature it as the scaffolding for dystopias or the incendiary start of a thriller rather than as the subject of a realistic examination. Leila Sales’ If You Don’t Have Anything Nice to Say (BCCB 5/18) was a thought-provoking exception; now there’s serious engagement with the topic in Look.

Seventeen-year-old Lulu is a social media sensation on the Snapchat-like platform Flash, and she spends her days in constant self-anthropology, reflecting on the public signification of her every post—for that matter, her every move. Then she meets Cass, who’s got an authenticity that grabs Lulu, and as they become friends. Cass introduces Lulu to The Hotel, an empty old grand facility that Cass’ rich friend, Ryan Riggs (from a premier Los Angeles family of generational wealth), is remodeling for reopening.  Sometimes joined by a select few other friends, including Lulu’s ex, Owen, the girls find The Hotel an amazing secret place that incubates their romance—until they discover that what they thought was private has been captured and commoditized by Ryan as images of their relationship, often taken without their consent, are the visual leitmotif at The Hotel’s grand reopening.

The present-tense narration is appropriately immediate, and the book offers a deft but not overdetailed depiction of a brand-studded lifestyle where the difference between the super-rich and the merely well-heeled is a yawning chasm. There’s also a sensitive exploration of Lulu’s evolving and underconsidered relationships with her best friend and her older sister as well as her ongoing friendship with Owen and her complicated romance with Cass.

It’s Lulu herself that makes the book, though, as Romanoff perceptively captures the mindset of a girl who can’t imagine life without calculating the impact of every action or presentation (“Once you understood how it functioned, you could adjust the optics and control the scene instead of just starring in it”), who is enviably good at it, and who begins to feel crushed under the weight. Her response to her own social media misstep (a makeout session with a girl that was meant to be a flirty gesture sent privately to Owen was posted publicly) is astute and considered and culturally contextualized, as she gradually admits to herself that her deliberately audacious “party trick” of kissing girls hid her actual desire to kiss girls and that her romance with Owen was petering out.  Yet she’s compelling as well as credible as a smart girl possessed of no particular vanity (“She can’t imagine what it would be like to look at her and not already be tired of what you saw”) who takes the need for image creation for granted and begins to unpack why she’s so focused, looking especially at the SoCal/Hollywood history and current milieu where her actress mother’s income “depends on those men still wanting to look at her.” It’s an exploration that leads naturally into her rage at discovering that Ryan has deliberately replicated and expanded her social media experience in a classic move of male entitlement to use of the female body for money and power.

Ultimately, though, Lulu’s victory is to move beyond her mastery of being looked at, positioning herself as subject rather than object with a public video sharply titled What I Looked at While You Were Looking at Me.  Readers negotiating the sometimes buoyant, sometimes treacherous, nearly unavoidable currents of social media will find her journey a gripping and credible exploration of the way image, gender issues, and contemporary culture intersect.

Cover illustration by Theresa Evangelista from Look copyright © 2020 and reproduced by permission of Dial Books for Young Readers.