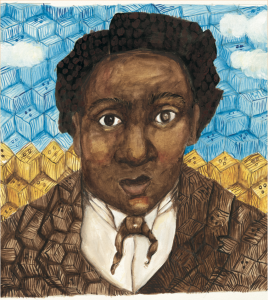 Picture book retellings of the celebrated story of Henry “Box” Brown, an enslaved man who escaped from Richmond to Philadelphia in a packing crate, often take the tone of a trickster tale—and appropriately so, in the folkloric tradition that hails Wit’s triumph over Evil, Ignorance, or Cruelty. Here, however, Weatherford and Wood collaborate on a deeper investigation into Brown’s life, based closely on his 1851 Narrative of the Life of Henry Box Brown, Written by Himself, and recast into six-line free verse poems and symbol-rich paintings that soberly focus on the wretched confinement of a man sealed into a crate, or a people trapped in slavery.

“Six” is the unifying motif for Weatherford’s text. Opening with “Geometry,” six deceptively simple words—“How/ Many/ Sides/ To/ A/ Box?”—shaped into a numeral 6 that’s also an inverted question mark, she guides readers to look carefully through this lens at all that’s to come. To answer that opening question, readers will move quickly beyond a pat response of “six” to reshape the enquiry. How many facets are there to “Box” Brown’s life? What are the functions of a box? How does a box signify enslavement? Is a person freed from that box automatically at liberty? The sixains that follow are unadorned and tidily stacked on blank white space like inconspicuous packing crates, their visual simplicity belying the desperation building in Brown as owner after owner betrays him, and his wife and children are sold away: “I see my wife, grab her hand, and walk four miles with her./ We shall meet in heaven, I whisper. Then she is gone./ Lord, what more have I to lose?” He answers his own question in “Courage,” committing to his audacious escape plan: “The breath of life is all I have to lose./ And bondage is suffocating me.” The triumph of his arrival in Philadelphia then quickly devolves into the reality of how fragile “freedom” will be, as he loses hope of reuniting his family, and his abolitionist career morphs into public performance: “I cast a new character, a well-dressed African prince./ Later, I spice up my act with hypnotism.”

Alongside Weatherford’s spare verses, Wood’s paintings fairly explode with vivid visual motifs of quilts and confinement, with thickly brushed images rigidly squeezed and folded within borders that strain to hold them. As recently freed Brown pens his Narrative, he has little room to move at his wooden table, penned in by childhood memory and the haunting framework of an empty box. When he works the wide-open tobacco field, his stooped posture has no wiggle room between earth and sky. Even as he flees antebellum America for safety in England, he’s still entrapped—a rigid bust perched on the deck of a wooden vessel, weighted down by heavy sails and heavier skies. Wood foreshortens backgrounds with a forward press of geometric patterns, many drawn from quilts that provided both functional signage and symbolic iconography for enslaved people seeking freedom. Tumbling blocks in particular are sensitively deployed to reiterate the figure of Brown’s famed crate (see this month’s cover) and the continuous cascade of confinements that constrained people without true liberty.

Our last view of Henry Brown finds him walking resolutely down a broken rail track, upright and in full stride, following a dove of peace.: “Freedom/ Is/ Fragile./ Handle/ With/ Care.” Middle grade- and school readers are at an ideal age to begin unpacking Brown’s story, and the harmonious interplay of word and image will invite youth with strong preference for either literary or visual formats to join in common discussion of the concept of freedom. An appended timeline sets Brown’s story into context of national events; a bibliography is included, as well as notes from Weatherford and Woods discussing their creative processes. (See p. 411 for publication information.)