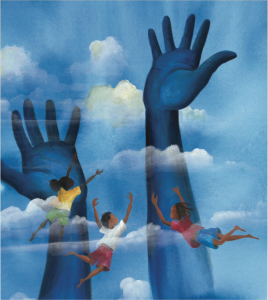 Blue: A History of the Color as Deep as the Sea and as Wide as the Sky

When Brew-Hammond’s primary-school audience first encountered “blue” in picture books as little ones, the pedagogical goal was likely identification: distinguish the blue balloon from the red one, recognize the difference between the blueberry and the cherry, or note the change in shades between the morning and twilight skies. Now, however, that audience is invited to make a conceptual leap and ponder what blue is. If sea water runs clear through your fingers, where does the blue go? If blue can be that elusive, how do we capture it? And, provocatively, how has blue managed to permeate language, to influence and reflect our moods? It’s a tall order for a short book, but Brew-Hammond’s graceful prose and fluid organization, coupled with Minter’s emotive illustrations, set synapses firing.

Exposition begins with an overview of the earliest human efforts to harness sources of blue, which “appears in the strangest places, discovered throughout history in unexpected ways.” Ground lapis lazuli from the region of modern-day Afghanistan found its way into Egyptian cosmetics and, later, into paint. Animal dyes appeared next, coaxed drop by drop from cracked snail shells in the Middle East and squeezed from snail feet in Mexico. Yielding a cheaper, more durable dye, Indigofera plants advanced trade in blue, with exports from India and West Africa making those regions into hubs but also staining blue’s narrative: “Indigo became so precious, people spent it like money. In parts of Africa, some merchants used strips of indigo cloth to buy people, and sell them into slavery.” By 1905, when chemical blue made an official appearance, generations of global workers had been forced into labor to feed the demand of the royal and the wealthy for fabrics in coveted blue.

The text segues then to contemporary times, connecting the scarcity, value, and even religious associations surrounding blue to the personal feelings it has come to connote. The blue of sadness is rooted in “painful memories of working the mines or of slavery on indigo plantations,” while “nothing but blue skies” counters pain with hopefulness. “Once in a blue moon” harkens to blue’s rarity as pigment and dye, and blue ribbons are used around the world as recognition of greatness, perhaps referring to the color’s longtime association with royalty.

Minter, whose body of work demonstrates an intimacy with the intricate patterns of African wax resist dying techniques, is an ideal illustrator for this title, as he weaves rhythmic lines and patterns into representations of fabric and stylized backgrounds. The emergence of blue dye work in non-European cultures is visually evidenced in scene after scene of brown-skinned inventors and craftspersons whose names are lost to time. Those people are reimagined here, engaged in their creativity and labor, or as midnight blue shadows stealthily materializing from dappled clouds and adire cloth. An author’s note, list of resources, and hints for further exploration are useful addenda, but children will require little urging to brainstorm ways that blue imbues their lives and ponder the hidden histories of other colors as well.

Cover illustration by Daniel Minter, from Blue: A History of the Color as Deep as the Sea and as Wide as the Sky copyright © 2022, used by permission of Penguin Random House.