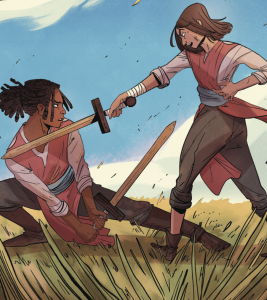 The push and pull of power—who has it versus who wants it—can motivate or defeat. For those feeling particularly powerless, the heady draw of becoming an insider can be an invigorating promise. But what happens when the promised land turns out to be a metaphorical desert rather than an abundance of inclusion, wealth, or status? In Squire, a riveting, timely alternate history of the Middle East, Arab-American Nadia Shammas and Jordanian-American Sara Alfageeh layer complicated power dynamics with a refreshing visual and cultural setting, which stands out in a graphic novel field long dominated by white authors and protagonists.

The Ornu people are considered outsiders in Bayt-Sajji, afforded few resources as second-class citizens and easily identifiable by tattoos on their bodies. Headstrong and driven to rise above her currently limited circumstances, Aiza aims to join a military training program that promises to turn squires into Knights and earn her own citizenship in the process. She is surprised her protective parents let her go, but they still warn her to hide her tattoos—they worry (correctly) she will not be given a fair chance if people know her background. At first, training is all she ever hoped for, but things quickly go awry; there are potentially deadly political machinations going on in this training camp and Aiza is soon caught in the middle of it all, exposed as Ornu and in grave danger.

The lush art strengthens and augments the text rather than mirroring it: vibrant color, carefully placed shadows, and judicious use of proportions and size between characters deftly convey emotion. Rich crimson and ochre shades are particularly effective with the usually wordless, violent battle scenes, heightening tension with dramatic colors that reflect the life-threatening action. Meanwhile, fluid perspectives and paneling bring more subtleties; for example, Aiza is smaller or larger within a panel depending on her emotional and physical vulnerability.

That vulnerability, along with her righteous anger and relentless ambition, make Aiza the heartbeat of this novel, but Shammas and Alfageeh also develop nuanced secondary characters who represent good, evil, and a discomforting mix of both. The bad guys have reasons and histories, the good guys have certainly made their share of mistakes, and the assumed simplicity of haves and have nots is revealed to be complexly entrenched in a social hierarchy not so easily toppled.
Exceptional end matter rewards curious readers with notes from the author and illustrator about their own identities, contextualizing the cultural backgrounds and knowledge that give the story such indelible roots. Formation details, sample illustrations, shared communications between author and illustrator, and an  examination of how some characters evolved during the creation process are all so extensive that readers are essentially offered a mini class on how the seed of an idea can grow into a full-fledged graphic novel.

Reconciling noble goals with the unethical choices required to achieve them is a perennial struggle, in both fiction and reality, and Aiza’s journey will leave readers with much to contemplate long after they close the book.

Cover illustration by Sara Alfageeh, from Squire © 2022, used by permission of HarperCollins.