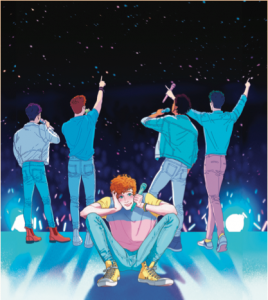 Seventeen-year-old Vancouver native Hunter Drake has a dream life. As the openly gay member of a chart-topping boy band, he’s a role model and advocate for queer kids everywhere, and he’s about to embark with his best friends on their first cross-continent stadium tour. Inside, however, Hunter is a downward-spiraling wreck, and his growing resentment at playing a role both on-stage and off it might just lay waste to his friendships, romance, band, fanbase, and musical future alike—or it may create a space for Hunter to perform as his best, truest self.

Hunter’s recent break-up with longtime boyfriend Aidan unfolded badly, and his most private sexts are now public, damaging his clean-cut gay-boy image and the band’s album sales. So, when the Label steps in, suggesting a reputation-saving romance with Kaivan Parvani, the adorable drummer of their opening act and someone Hunter’s crushing on anyway, it seems like the perfect solution, even if it takes time away from bandmates and song writing for their all-important third album. As his relationship with Kaivan blossoms, though, Hunter quickly tires of using his real feelings to feed a PR-stunt.

Khorram sets Hunter’s struggle to find his authentic self against the trappings of contemporary fame and online fandom here, providing an in-depth, multifaceted look at the best and worst of the media whirl Hunter occupies. His first-person narration exists alongside squee-ing fan posts and slash fan fiction, intrusive articles with juicy click-bait headlines, concerned columns explaining his behavior to young fans, and sample emails from Label executives looking to market an overtly feminized image once it’s revealed Hunter is a bottom. All combine to craft a picture both realistic and unsettling, an indictment of celebrity culture but also a compassionate look at Hunter, who is understandably, even relatably, reluctant to set boundaries, especially when his public accessibility allows him to maintain the pop star life he loves, continue the good work he does with his national platform, and, more essentially, protect the band’s future for his friends.

The interwoven elements, buttressed by an editorial about “the performance of hetero-respectability” and a photoshoot with other out celebrities, invite readers to question what audiences demand of queer celebrities to make them acceptable and palatable. It’s a compelling, impressively crafted theme that is made only more inclusive as Hunter learns he’s not the only one conforming to a public-friendly image. His bandmates’ “mosaic of ethnicities” (there are Vietnamese-, Brazilian-, and Indian-Canadian members) alongside Iranian-American Kaivan, gives readers more windows into the pressures faced by diversity representatives and ultimately opens Hunter’s eyes to struggles beyond his own.

Indeed, it’s the open, honest friendships he shares with his bandmates—one of the novel’s strongest emotional resonances—and his new love for Kaivan that draw his gaze away from his navel to focus on racial and intersectional struggles. The novel also wisely avoids the idea that one person’s suffering negates the importance of another’s, instead letting Hunter’s self-reflection feed into empathy and end with a mutually supportive respect for everyone’s limits, even Hunter’s ex’s.

Readers looking to celebrate their boy-band fandom or add to their boy-meets-boy reading list will revel in everything this novel has to offer: the joy Hunter feels on stage, the depth of his male friendships, and the supportive but not blind love he shares with Kaivan. Ultimately so much more than the simple romcom, this is a thought-provoking pleasure read that hits all the right notes.