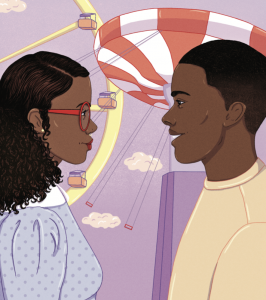 Kai Johnson is a serial monogamist, while Zyla Matthews is committed to singledom, but when the two meet while working summer jobs at Sailor Joe’s Amusement Park, everything they believed about love and romance is challenged. As the months go by, Kai and Zyla get together, fall in love, and eventually break up. It seems to be a typical ending to a high school relationship until months later when the two apparently run away together during their Senior Day trip in the Poconos. Their shocked friends and family reflect on key moments from the past as they try to understand what happened between the two teens; everyone has a different idea, but only Zyla and Kai know the truth.

What would have been a simple, albeit sweet, YA romance is elevated by Forest’s mastery of the narrative structure, as she utilizes different tenses, points of view, and styles, to make the book almost act as a relationship primer, exploring a wide variety of romantic relationships through the experiences and perceptions of supporting characters. Most of the book is written in third-person past tense and has an invitingly conversational style: “No doubt the story had evolved to include some elements that weren’t true . . . The rumor mill game at Sailor Joe’s was strong.” The day of the pair’s disappearance, however, switches to present tense and focuses on the thoughts and perceptions of various secondary characters. The seamless shift in tenses moves the reader around in the timeline without interrupting momentum or breaking the immersive storytelling, layering the past and present perspectives to add an element of mystery to Kai and Zyla’s courtship.

Forest also brings a healthy dose of realism to the story through the relationship role models that directly and indirectly influence Kai and Zyla’s emotional lives. Kai’s parents (who tragically died when he was young) and his guardians (his aunt and uncle) have solid, supportive, and loving relationships that Kai is constantly seeking to emulate with his many romantic partners. Zyla’s parents, meanwhile, are divorced; her mom has had a string of disruptive failed relationships and her father’s philandering ways have contributed to Zyla’s cynical opinions about love. Additionally, the romantic escapades of their peers—including some of Kai’s ex-girlfriends—non-judgmentally model a variety of other relationship foibles and mishaps for teen readers who are themselves making their first forays into romance and dating. For example, when Kai’s best friend Jamal realizes his crush Alanna is using him, Alanna similarly realizes that while she enjoyed Jamal’s attentions, it was unkind of her to string him along. While most of the book focuses on heterosexual romantic relationships, Forest includes queer representation as well, as Zyla’s mother starts dating a woman, and readers get to see the seeds of that relationship begin to grow. Indeed, teenagers and grown-ups alike in the book are all stumbling and grasping toward fulfilling relationships in their own ways, with varying degrees of success.

Taken together, these explorations of the side characters and their zoomed-out perspectives, along with chapters focused on Kai’s and Zyla’s experiences, demonstrate the unexpected ways human lives are interconnected and how relationships are a culmination of experiences, perceptions, and assumptions. Reminiscent of Nicola Yoon’s works, it’s a smart, thoughtful take on a romance, ultimately imparting the value of self-reflection, positive communication, healthy coping skills, and forgiveness.