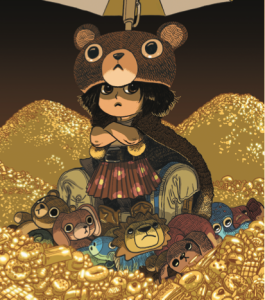 In this magnificent graphic novel retelling of Beowulf, an epic standoff between a man who loathes joy and the kids who flaunt their unbridled delight in his face (or more accurately, in a treehouse near his property) comes to a head, requiring the fabled Bea Wolf to come and stop the monster (or more accurately, the monstrous man) and save the innocent.

Treeheart was built by kids, the dream of one king in a line of many just, noble, and wise rulers, and the treehouse is a symbol of freedom from surly teens and hopelessly boring adults—the kids are quite literally above it all. One evening, however, their noise enrages Mr. Grindle, “Gloom’s guardian, teacher of grief! Born mustache-mouthed, tie-bound, Baron of Boredom.” Horrifyingly, Grindle has the power to destroy the luster of childhood with a single touch and thus turns nearly all of the children into much older, far more sullen versions of themselves. He has won! But wait, the few children that he has missed have one last hope, a savior from a fate of appreciating tax codes and eating carob cakes (“Lies! Fruit in cake’s clothing. Fibs enfleshed in flour!”). She is the hero who can right the wrongs and reinstate the wonders of childhood—she is Bea Wolf and she is verily a beacon of hope.

This is true bardic glory, a wild embrace of absurdity and wit with exaggerated language used for maximum impact: “Helmets of undies, no hand-me-downs these—fresh from the undie-pack! Your leader sparkles with power and also with sparkles.” It’s a drama that matches the kids’ fervent calls for childhood chaos, as if the fate of growing up is worse than death. Weinersmith leans into this with a zeal and unabashed dedication that will likely have older readers feeling a pang of loss as they find themselves closer to Carl, the original fearless leader of the kids, who is now a teen bagging groceries with only his legacy and memories as cold comfort.

Boulet’s illustrations are no less epic than the story, and the finely lined black and white drawings invite careful examination, with the payoff being clever visual side jokes. Grindle is particularly memorable, with angular lines and foreboding shadows, standing in sharp contrast with the open, brighter faces of the kids. The overflowing scenes of youthful revelry war for page space with the crowded scenes of adulting, offering a visual embodiment of self-expression battling with the inevitability of time (which, of course, eventually takes over everything). That is a darker consideration for another day, however, and effervescent youth triumphs here, even against as fearsome an enemy as Grindle.

Readers willing to digest some words after so many glorious, chaotic pictures will be richly rewarded by a highly detailed and lengthy author’s note, which wryly acknowledges that the only ones making it to the note’s end are probably librarians or future writers. In addition to a comparison of this graphic novel to the original Beowulf (about a third of which was adapted, with the author noting that the head eating parts of the original would freak out modern parents too much), the end matter features plentiful background information on the writing style and language, as well as drafts of illustrations. Long live the memory of Bea Wolf, hero to the oppressed and defeated, and long live Weinersmith and Boulet, faithful bard and illustrator of the tale.