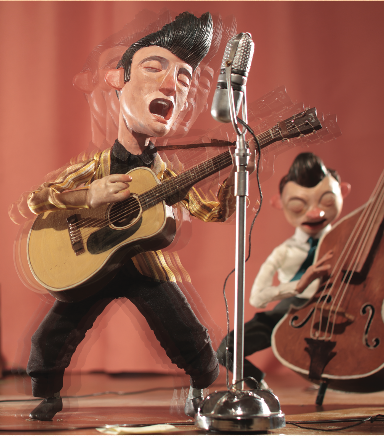 A reprise collaboration between Winter and Red Nose Studio is indeed something to celebrate (see Here Comes the Garbage Barge, BCCB 4/10), and both author and illustration team are at peak performance in this sly, rollicking picture book bio of Elvis Presley and his rise from mic-shy blond tyke to teen dreamboat with product-infused raven hair who turned his stage-fright trembling into iconic sex appeal. The Elvis Presley story has been told in picture books before (see, notably, Bonnie Christensen’s atmospheric The Story of the Rock and Roll King, BCCB 7/15), but this time around the creators give the music legend a, well, legendary treatment, with text and images that not only capture a life but poke gentle fun at the way that life has turned into an epic.

Each page or spread encapsulates a life milestone, heralded by a bold-faced title—“Elvis’s Daddy Is Arrested!”; “The First Cheeseburger Ever Eaten by Elvis”; “First Elvis Song Ever Is Played on the Radio (Take Two)”—and followed by a brief paragraph that reduces the episode to its minimalist core. The resultant tone is that of a well-known tale often shared, and although there’s a presumption that listeners may not have heard all these anecdotes before, they will instinctively know that this is a story of utmost importance. When that forementioned cheeseburger is consumed “in tiny downtown Tupelo,/ where everybody stares/ ’cause Mama ain’t wearin’ no shoes. [snicker snicker snicker]” we know there’s a rags-to-riches trajectory ahead and that this poor boy is gonna go far powered by his mama’s love. Regional expression, rooted in Winter’s own Southern childhood, flavors the intimate narrative voice, which claims this boy-made-good as one of her/his own and urges listeners to do the same: “What would you do if you were just a poor country boy/ in the big city, aching to be something more,/ craving to be loved/ the way a starving dog craves food?”

Red Nose Studio’s artwork, though, hints broadly that this heartfelt-bordering-on-mawkish narration has been as carefully constructed as the polymer clay figures and found object sets that illustrate the Elvis story, and it confers permission on audiences to let loose the winks and giggles. When “Little Elvis” first hears the gospel singing in an African-American church (“Good Lordy Mercy!/ He ain’t never heard nothin’ that sweet before”), the church itself rises on angel wings above the dusty road. When he gets “The Call” from Sun Records for a recording deal, “Overjoyed Elvis jumps up and down/ and walks on the ceiling and then flies,” soaring into the magenta sunset, far above his barefoot mama. And “The First Time the World Gets to See . . . the Brand-New Elvis” in full gyrating glory, his trademark upswept forelock towers like a monument and his body is haloed with cleverly photographed visual echoes as his “shaking starts an AVALANCHE of screaming—in a good way.”

In a closing note Winter marvels at Elvis’ rapid year-and-a-half transition from aspiring nobody to rock star, confesses his own habit of “still channeling my inner Elvis occasionally, belting out one of his early songs when no one’s around,” and, most importantly, provides contextual background on the recording industry that launched the King. Sun Records “absolutely was looking for a white musician to play ‘black music’ for white teenagers,” and Elvis’s debut rendition of “That’s All Right,” written by black R&B musician Arthur Crudup, was exactly what producer Sam Philiips knew would sell. Still, Elvis’s mash-up of gospel, R&B, blues, and rock influences was very much his own, and kids who take Winter’s advice to explore the music themselves will be proud they know the backstory. (See p. 187 for publication information.)

Cover art from Elvis Is King! by Jonah Winter © 2019 . Reproduced by permission of Schwartz & Wade Books.