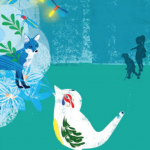 written by Beth Kephart and illustrated by William Sulit

“This is a victim impact statement,” says thirteen-year-old Lizzie in the book’s opening. She insists, though, that there’s a larger story behind the statement, and moreover, there are choices that shaped the story, decisions she will parse out and pick through as she recounts what led to her current stay in a hospital, in what’s gradually revealed to be the aftermath of an event involving two escaped prisoners in a massive national forest and two of Lizzie’s favorite people, her uncle Davy and her friend Matias.

Let’s start at the beginning: when Lizzie’s mother must undergo treatment for thyroid cancer that will made her radioactive, Lizzie chooses to spend the summer with her uncle at his cabin in the Adirondacks. Wait, is that really the beginning? Or did Lizzie’s story start when her celebrity uncle lost his lover and found peace in the woods, woods that Lizzie came to see as her second home over the years? Certainly, her friend Matias’ choosing to wait for Lizzie at their special meeting place in the forest is directly linked to his kidnapping, but if they hadn’t selected that spot last year or if they had changed their plans, all of the ensuing drama could have easily been avoided. Then there’s the young woman, so desperate to win her imprisoned father’s love that she goes to illegal lengths to help him, with terrible results. And, to go full circle, isn’t Lizzie’s own father, who took off years ago, responsible for Lizzie having to go anywhere in the first place when she could have stayed home with him had he been around? Similarly, sporadic illustrations, watercolors ostensibly by Matias, seem to hint at events and places. All of these circumstances take shape in a way that eventually leads Lizzie to decide to head out into the wilderness to find her missing friend and uncle, who may have been abducted by two convicted murderers.

The past and the present slip and slide through Lizzie’s narration as she tells her story to an off-screen listener; the format speedily brings tension—it’s clear from the start that something bad has happened—and it also allows for an intriguing disorientation, with the clues to the identity of her audience sparingly but strategically laid out. Lizzie moves between giving the facts of her pathfinding and survival in the woods and winding though long tangential thoughts, where she ponders all of pieces that had to fall into place to put her in her current predicament. The result is a story that has both a compelling urgency and an engrossing, if often bitter, thoughtfulness.

There is a barely contained fury to Lizzie’s voice, as she thrashes against the idea of victimhood, mocking any proposal at healing (“They say telling heals. I’m not persuaded”), even as she recognizes how impactful her trauma has been, and how much she needs help, for the sake of herself and those who love her. Her insights come with a sting of lessons learned, and she recognizes that more difficult than healing her broken body will be living with the terrifying truth that every slight choice has entirely unpredictable consequences, whether immediately or down the road. With a girl battling the wildness of nature, the unpredictability of humans, and the whims of the universe, this is a survival story in its truest sense.

Cover image from Wild Blues © 2018 used by permission of Atheneum.