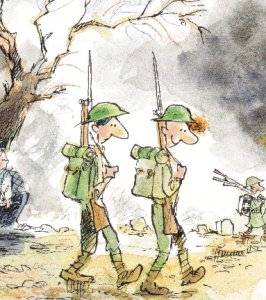 Jules was born two minutes later than Jim, the boy next door who would become his best friend, and he’s never been able to make up for that lost time: “Jim always took the lead; he was faster and stronger than Jules.” The two are nonetheless inseparable, and when news of war reaches their Canadian town in 1914, they enlist together. True to the pattern of Jim’s hustle and Jules’ shuffle, Jim arrives everywhere on time, garnering the best-fitting uniform and the shiniest new convoy ship overseas; he’s the first over the hill in any action and has the medal to prove it, while Jules follows in his wake, determined but undistinguished. They do their duty in the trenches, and “sometimes at night, the two friends hugged each other. Sometimes they even cried as they talked about going home.” The Great War winds down, the generals and statesmen negotiate an armistice, and the soldiers fight until eleven on the morning of November eleventh. Jim, true to form, battles a tad more furiously than Jules; he catches a fatal bullet at 10:58, leaving his ever tardy friend to return home and rebuild a life on his own.

This antiwar parable, dedicated to George Lawrence Price, the last Canadian solider to die in World War I, at 10:58 on November 11, 1918, is a powerful and accessible multi-audience picture book that imbues meaning to the hundredth anniversary of a war’s end now shrouded in the long ago while challenging young readers to weigh the merits of current conflicts in the news. For younger children or those who simply focus on the economical text and glance at the loosely cartooned line and watercolor illustrations, Goldstyn offers a compact précis of the war through the experience of two Everymen who “didn’t understand all the news reports about treaties and alliances, but . . . understood that their country needed them.” Recruitment, training, and transport; trench and aerial warfare; women taking up domestic and wartime employment on the homefront; armistice, last-second tragedy, and a legacy of commemorations are part and parcel of the Great War, and although impetus and weaponry may shift and evolve, they basically reprise and presage every other war.

For older readers, or those inclined to linger and take in the gruesome scenery, Goldstyn conducts a masterclass in visual storytelling. From our first introduction to the baby boys asleep in their cribs, it’s clear that Jim, with his curly ginger topknot, has advantage beyond two minutes of lead time; he dozes in a painted, decorated little bed with a cat by his side, while Jules sleeps in a soapbox with a mouse looking on. He’s stacking blocks while Jules gnaws on them, toddles while Jules is still on his knees, whizzes along on his two-wheeler while Jules relies on training wheels. It’s empathetic Jules, though, who looks at his worn-down fellow soldiers and realizes they’re starting to look like cavemen, and who glances back at the row of German prisoners, wondering whether they’re luckier because, for them, the war is over. The violence, acknowledged but underplayed in the text, develops visually. It starts with the shocking moment when the cheerful imagery is besmirched by the blood spatter from the assassinated archduke, then it’s brought close to home as Jim bayonets a practice dummy during training, and it climaxes in dark absurdity as Germans and Allies storming a symbolic hill leap to their deaths in a steaming “huge cauldron that kept devouring men.” The postwar dénouement, in which Jules makes his livelihood as a horologist, delivers the final irony: Jules now make clocks, which all run two minutes slow, and when there is a wreath-laying ceremony at the war memorial he is, of course, two minutes late.

Two minutes. It can be the line between war and disarmament, and it can be the difference between losing or keeping a friend.

Cover art from The Eleventh Hour @ 2018 by Jacques Goldstyn. Reproduced by permission of Owlkids Books.