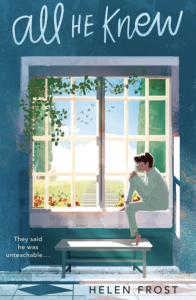 The 2021 Scott O’Dell Award for Historical Fiction goes to All He Knew by Helen Frost, published by Farrar Straus and Giroux.

It’s 1939, and six-year-old Henry, rendered deaf by illness, has failed a ridiculous single evaluative test, so authorities officially classify him as “unteachable” and direct his straitened farming family to send him to the Riverview Home for the Feeble-Minded. There Henry figures out survival in the abusive facility, closely guards the fact that he can speak, makes friends, and misses his family. His family, especially his older sister, Molly, misses him too, but visits are costly and therefore rare, so Henry is largely on his own as the years go by. The war brings conscientious objectors onto the facility staff, and kind Victor, who soon realizes that Henry is much smarter than he’s classified, connects with Henry’s family to make a better plan for his future.

An established verse novelist, Frost brings her meticulous technical skill to bear in a narrative that mixes free verse and sonnets. The structure enhances without ever interfering; young readers can gallop through the text as if it were spare, conversational prose, or they can pause to consider the soft luster of lines such as “Henry considers this, realizes / He could hide inside / The person people think he is.” The historical period subtly infuses the story, as the wartime economy brings changes outside the institution as well as in, but Henry’s circumstances and evocatively conveyed viewpoint will still quickly capture contemporary youngsters. Henry and his perceptions are centered throughout; even in a situation of limited power, even without verbal communication at his command, he acts with agency as he strategically tricks cruel staffers and extends the hand of kindness to other boys. Determined sister Molly is a splendid reader surrogate as she keeps faith with her brother and jumps at the chance to find a way to bring him home.  It’s a story that can work with readers of various ages, so it would make a compelling family read or readaloud as well as an individual exploration.  Though there’s tragedy here, ultimately, it’s a tale of youthful resilience, of a boy full of unquenchable, hopeful life.

The Scott O’Dell Award, created by Scott O’Dell and Zena Sutherland in 1982 and now administered by Elizabeth Hall, the widow of Scott O’Dell, carries with it a prize of $5000 and goes annually to the author of a distinguished work of historical fiction for young people published by a U.S. publisher and set in the Americas. The winner is chosen by a committee appointed by Elizabeth Hall; its members are Elizabeth Bush, former librarian at St. Damian School and adjunct faculty at the iSchool at the University of Illinois; Roger Sutton, editor in chief of The Horn Book; and, as chair, Deborah Stevenson, editor of The Bulletin of the Center for Children’s Books. For more information about Scott O’Dell and the Scott O’Dell Award please visit scottodell.com or contact Deborah Stevenson at dstevens@illinois.edu.

Image from All He Knew © 2021 by Helen Frost, reproduced by permission of Farrar Straus and Giroux.