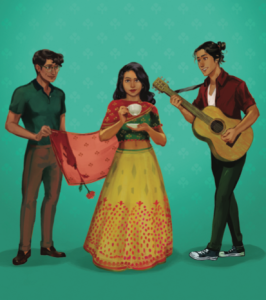 The Love Match begins with a wedding, and in her introductory note about Bangali films (natoks), author Priyanka Taslim clarifies the stakes that such an opening scene brings: “if a natok ends with a wedding, it’s almost always a happily-ever-after. . . .  if it begins with one . . . let’s just say it’s asking for nothing but trouble.” Trouble does indeed follow Zahra Khan in this delightful modern comedy of manners, inspired by Taslim’s reflections on the parallels between Austenian regency romances, her own family’s persistent matchmaking attempts, and the Deshi social politics of their “colorful Bangladeshi, Muslim diaspora community.”

While Zahra’s friends are excitedly preparing to go away to college, Zahra has had to put her dreams of studying creative writing at Columbia University on hold to work at a tea shop (punnily called Chai Ho) to help support her mother and two younger siblings after her father’s death. That’s enough stress for a high school senior, but now she must contend with her mother’s plan to marry her off to Harun, the son of the wealthy Emon family. The new-money Emons are interested in Zahra’s royal lineage, and Amma is interested in the Emons’ wealth: it’s a match made in Bangladeshi auntie heaven. However, Amma’s perfect plans are complicated by Harun’s cold, smug demeanor and Zahra’s crush on Nayim, the new dishwasher at Chai Ho. Since neither Harun nor Zahra can stand to disappoint their families, they hatch their own plan; they will pretend to date while doing everything they can to convince their parents they would be a total disaster as a couple. That leaves Zahra free to get closer to Nayim while Amma is distracted, but as Shakespeare said, the course of true love never did run smooth.

Taslim has crafted a realistic love story, peopled with richly developed characters and a wide variety of circumstances, relationships, and troubles for her refreshingly self-assured heroine to navigate. Zahra is an admirable descendant of many Austen heroines: sharp, witty, and observant as Elizabeth Bennet, youthfully short-sighted like Emma Woodhouse, but also possessing the steady character and sense of purpose of Eleanor Dashwood. Her relationships with her friends offer tender yet complex explorations of friendships marked by both true affection and class insecurities. With a frankness that at times is almost grim, Zahra muses over her bitter feelings as her friends prepare to go to college while she is staying behind: “Dread cracks open inside me, gaping and raw. Things are changing between us, whether I want them to or not.”

The Bangladeshi immigrant community of Taslim’s Paterson, New Jersey, like Austen’s Regency upper class, is concerned with the social dynamics of marriage, as gossip-filled drawing room conversations get a modern refresh with the Auntie Network group chat, in which Zahra’s mother and family discuss who’s who in marriageability. Zahra’s two suitors represent two different paths she can take in her life. Nerdy Harun is dependable and steady, and the romance between him and Zahra is built on a foundation of friendship and shared values; romantic Nayim is charming and spontaneous, supporting Zahra’s dreams and encouraging her creativity. Readers can easily see how both boys could be a good match for Zahra, and Taslim avoids making either one a villain. Though Zahra does make a choice and achieve a satisfying happy ending with one of them, the book thankfully avoids the traditional natok and Austenesque ending of a marriage for the eighteen-year-old protagonists.

Taslim’s writing style keenly balances the sometimes crushing weight of social pressures with a light, humorous touch, ultimately creating an optimistic future for her characters. While grounded and mature, this stunning debut still offers readers all the drama, twists, and tropes to satisfy any lover of soapy romance, and it wholly deserves a place alongside other great Austen-inspired works, like the 1995 film Clueless.