See this month’s Big Picture (below) for full review. 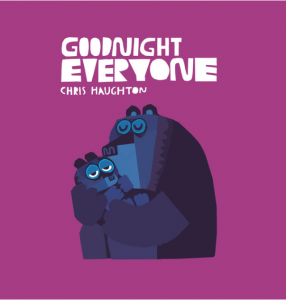 There are a lot of bedtime books—a lot of bedtime books—out there. It seems like the easiest genre to write—it’s getting darker, bed is approaching, somebody is or isn’t tired, yadda yadda—and there are plenty of perfectly nice but unremarkable outings in the genre. It’s therefore a delight to encounter a book such as Chris Haughton’s Goodnight Everyone, whose effortless craft demonstrates the beauty, tenderness, and sheer manipulative cunning of a bedtime book at its best.

The book opens with the classic setup: “The sun is going down and everyone is sleepy.” Several animals are ready for bed: the mice, the hares, the deer all yawn and settle down for the night. So does Great Big Bear, but Little Bear bucks the trend, insisting he’s not tired and trying fruitlessly to get somebody to play with him. Eventually, though, even Little Bear fades, and now “the moon is high and everyone is fast asleep.” The rhythmic text superbly weaves in the requisite sleepy structure; the whole book is focused on deceleration as the sequences of animals and sounds reiterate at slower intervals, and the neat bookends of the setting sun and the rising moon thematically reinforce the cyclic inevitability. Sound effects are effectively deployed: there are sighs of increasing length, somnolent yawns that may send the reader-aloud to sleep ahead of the audience, and wonderfully performable snores punctuating the prose and rising to their apex in the smack of a “great big goodnight kiss.”

Where the text employs classic elements, the bold graphic styling and glowing high-contrast color in Haughton’s digital art is a stunning contrast to more markedly cozy bedtime books; there’s even a touch of ’70s psychedelia in the electric vibrancy of the early spreads, punctuated by the whites of the animals’ heavy-lidded eyes. The palette evinces a tropical flair at the outset, with violet bushes, scarlet trees, and grass in lemon yellow and apple green, all housing animals in deep shades of blue; as the night draws near, however, the grass shifts to navy and purple-blue and the colorway suggests less sunny radiance and more sweet sunset glow. The blocky styling of figures and landscapes is highly contemporary, however, in its crisp yet pleasingly irregular lines and stylized landscape details. Like the text, the art wittily incorporates sequences. One funny one is the quartet of mice and the trio of hares modeling increasing degrees of drowsiness and lowering of eyelids. The most dramatic, though, is the opening progression of liftable page flaps that introduce our characters and underscore the text; the progression immediately sets up the pace and also splices together neatly when the flips are closed, resulting in a little peekaboo game within the book that will entrance viewers right off the bat. The endpapers are surprisingly astronomical, featuring the solar system and the constellations of the northern and southern skies, suggesting a linkage between the sky-dwelling Ursa Major and the text’s Great Big Bear but leaving it to audiences to decide the exact nature of the connection.

The result builds on classic traditions (are the echoes of Goodnight Moon deliberate or just inevitable for the genre?) while offering the pleasure of originality. That’s what you look for in an bedtime ritual, and this is a ready-made one that families will relish adding to their oeuvre; both readers-aloud and listeners will find it hard to keep their eyes open long enough to finish the book.

Cover art from Goodnight Everyone © 2016 by Chris Haughton. Reproduced by permission of Candlewick Press on behalf of Walker Books, London.