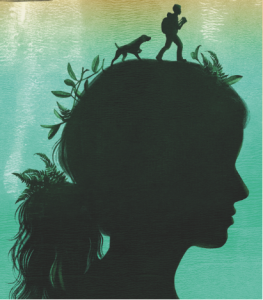 Gabe in the After

“Is that what you call it? The end of the world?” inquires oddly optimistic Relle of fourteen-year-old Gabe, who’s pretty skeptical of humanity’s fate after a virus ripped through the world, collapsing modern society. Current readers might share Gabe’s sentiments, as events once relegated to history books—a global pandemic, an international war, an unstable world order—are now very much in the present, complicated by the existential threat of climate change. If it is not the end of the world, then, it certainly feels unsteady, and Gabe must find his footing on shaky ground.

When the virus hit two years ago, Gabe’s mother and sister fell ill, and his physician father sent him to an island off the coast of Maine to stay safe. Gabe, seventeen kids, and adults Sylvia and Peter have built a life there, and they’ve never seen any evidence of other survivors on their trips to the mainland for supplies. Gabe is therefore understandably shocked when he finds Relle in the mainland forest, seemingly healthy and, at least to Gabe, confusingly upbeat. Her arrival on the island makes for a much-needed injection of joy—she even begins to plan a talent show with the other kids—and Gabe finds himself falling for her, exchanging his relentless pessimism for some of her cheerful live-in-the-moment attitude. Tragedy strikes, however, when Peter dies from a heart condition and Gabe blames himself—he’d considered himself the group’s de facto medical expert. So, leaving Relle behind, he decides to follow the rumors of a military base on the mainland to get medicine and possibly a doctor for future emergencies.

The post-apocalyptic world Doleski offers up, both on the island and on Gabe’s mainland journey, is a surprisingly generous and perhaps even realistic look at humanity. Yes, there are some people who lapse into looting and violence, but there are plenty of others trying to do their best in a barely sustainable situation. The military base, for example, isn’t particularly welcoming to Gabe, but they do share their resources, including a ham radio that Gabe uses later when a child on the island falls ill. Doleski could have easily followed a familiar track, pitting the peaceful island folks against the big, bad industrialists at the base, but instead she lets that commentary rest, trusting her reader to recognize that both approaches to survival are valid but also flawed in their own way.

For all his cynicism, Gabe is still an innocent when it comes to romantic relationships, thrilled at the prospect of holding Relle’s hand and attempting to impress her with his prowess at Scrabble. The third-person narration approaches his awkwardness with compassion and respect, acknowledging that he’s particularly unprepared to navigate adolescent relationship dynamics, having spent the last two years honing his survival skills over his social ones. His bond with Relle unfolds sweetly, bright in its simplicity and heartening amidst such bleakness. Relle, for her part, hovers close to the manic pixie dream girl trope, but that’s tempered by several moments of true vulnerability, and it’s clear her earnestness is as much a coping mechanism as Gabe’s wariness.

So perhaps it is not so much Relle’s question that needs answering here, but Gabe’s: “Was he allowed to feel joy? To feel happiness in the After?” The book’s parallels to current events invite readers to try to find that tender, elusive spot between resigned nihilism and blind hope in a world that is both brutal and beautiful. Whole religions and cultural movements have been built around that search, so readers can’t expect a clear answer here, but they’ll likely find solace and encouragement as Gabe and Relle move toward a future that offers little safety but plenty of wonder.

Cover illustration © Minnie Phan, from Gabe in the After by Shannon Doleski. Used with permission of Amulet/Abrams.