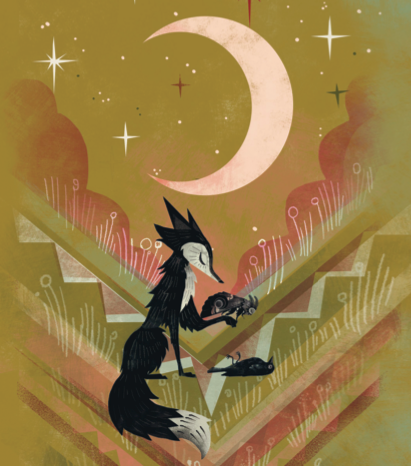 The Circles in the Sky

Few of us are lucky to escape childhood without some sort of loss, be it the death of a beloved pet or the passing of a close relative. Yet children’s literature about grieving tends to move quickly to the anger and sadness that follows a loss, rather than linger over the initial, raw confusion many younger readers experience in their first encounter with death. In its most immediate, day-to-day sense, what does death really mean? Where did the lost loved one actually go? Karl James Mountford’s The Circles in the Sky eschews practical certainty and spiritual platitudes for a scene of frustrated doubt between Moth and Fox, as both navigate their emotions in the wake of a bird’s death.

When the birds outside Fox’s den sing an unfamiliar tune (“It was neither happy nor sad . . . it was different”), Fox follows the flock as they take off across a hilly forest landscape, landing in a circle around something Fox can’t yet see. They eventually scatter, and he finds an inert bird that doesn’t respond to any of his attempts to get it to move. Moth flutters over, explaining that Bird can’t move because “Bird’s not here anymore in the way you and I are.” Fox is understandably confused; Bird is, of course, there, on the ground. So Moth attempts another explanation, telling Fox that the connection between the moon and the sun means that even though the sun disappears when the moon arrives, the moon remembers her by the reflection of her light on him.

It’s a lovely, if convoluted, metaphor about death and remembrance, and the book could easily part with such a calming image, but Fox isn’t having it. It’s here that Mountford leans into a child’s confusion about death, with Fox howling, “YOU’RE STILL NOT MAKING SENSE. STOP TALKING ABOUT MOONS AND SUNS. JUST TELL ME THE TRUTH. IF BIRD IS NOT HERE, WHERE IS BIRD?” Moth, for her part, admits with honesty that she was trying to soften the sad news that Bird has died and that death is simply hard to discuss. The two sit for a time with their grief, acknowledging that the only concrete reality is that Bird has passed and will only exist now as a memory.

The stylized illustrations capture this exploration of the tangible and intangible with a graceful beauty, balancing movement and energy against a background of stillness. The forest is anchored by sturdy geometry, with ramrod straight trees and angular hills rich in color. These shapes contrast effectively with Fox’s sleek, fluid body, the blackbirds’ twisty flight, and Moth’s soft curves, all rendered in shades of gray and black. Visual details emphasize the dance between life and death: fossils of running animals and the skeletons of two embracing humans can be seen underground as Fox leaps through the pages, moving past the ruins of an old house and old stumps surrounded by flourishing flora and fauna.

Mountford lets those visuals speak for themselves, allowing his readers to feel the weight of Fox’s emotions and subtly placing Bird’s death in the context of all living things. He wisely avoids Moth’s tactic of overexplaining but makes clear that Moth’s approach is as much to comfort herself as it is to reassure Fox. Taken as a whole, this is a poignant, aspirational model of reckoning with death’s immediate permanence as well as its unknowability.

Cover illustration by Karl James Mountford from The Circles in the Sky © 2022 and reproduced by permission of the publisher, Candlewick Press, Somerville, MA on behalf of Walker Books, London.